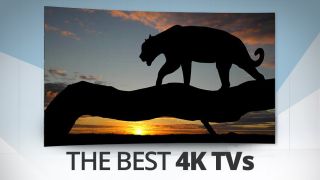 Choose the best Ultra HD 4K TV for you

The Indian television market is no stranger to 4K televisions. Yet, 2017 was perhaps the year when these became mainstream.

To be fair, these TVs are yet to take over the market, but with more and more brands making cheaper 4K TVs, it seems only a matter of time now. The high end TVs from Sony, Samsung and LG are still out of reach for everyone, but one could expect these to become cheaper in 2018 and beyond.

Sony announced its Bravia A1 television last year, competing with LG in the OLED market. Samsung's answer to these OLED panels was with its own QLED technology. Needless to say, there's really a lot happening in the television market, and we're here to help you make the right choices.

Stunning pictures at an affordable price

At the top of our list for 2017 is the LG OLED C7 – available in both 55 and 65-inch iterations. It's here because it delivers better brightness and light control than last year’s C6 (something we weren't sure was even possible), making it a high dynamic range performer that doesn't sacrifice OLED’s class-leading standard dynamic range capabilities. It delivers its new picture thrills at a price that finally makes OLED a financially viable alternative to top-end LCD sets  making it, beyond a doubt, one of 2017’s most irresistible TVs.

There are other OLEDs worth considering this year but we think the OLED C7 offers the best price-to-performance ratio of any TV under the sun in the year 2017.

Samsung was the first brand to introduce an HDR-compatible screen way back in 2015, but it's not been resting on its haunches ever since. Not just this, Netflix itself recommends you to go for this TV as it's one of the finest in the league for 4K content streaming.

It's latest flagship, the Q9F, is a perfect example of this. It ups the brightness to 1500 nits, 50% higher than the level required for UHD Premium certification, and the brightest TV we've ever tested.

Outside of an impressive-sounding number this brightness has a real impact on the set's image quality. Detail is preserved in even the brightest areas of the image, and colors are exceptionally vivid and bright.

No television is perfect, and the Q9F can occasionally suffer from some backlight clouding around bright objects. Additionally some settings cause color striping in HDR colours, but in all other respects this is the best television around at the moment.

However beyond its aesthetic appearance, the set delivers the same great picture quality we've come to expect from OLED, with blacks that are far darker than any you'll see from an LCD TV.

It's black levels were already impressive, but LG's development this year has been to boost the maximum brightness level that the set is capable of, resulting in images that really pop.

LG's flagship this year is the crazy-expensive OLED W7, but frankly the E7 offers a very similar level of quality at a much lower price. It still looks great, it's still packing Dolby Atmos, and although it can't boast the wallpaper thinness of the W7, it's not far off.

For all those reasons and more, the E7 OLED is a worthwhile addition to any home theater.

A set with couple of tricks up its sleeve

Whites and colors generally are bright and clear, blacks are surprisingly black for an LCD and the overall form-factor is nice and simple (in a good way).

The only question we have left is price. Panasonic wasn’t sharing pricing details when the set was revealed, but we’re hoping this provides a nice budget counter-argument to its high-end sets.

The Sony XE93 range is the more premium range that sits alongside the XE90 above and it's certainly a more ambitious set. Another amazing option for  those who love burning some serious  4K content, even Netflix says this TV is one of the finest to stream its content.

The XE93 features a Sony innovation known as 'slim backlight drive' which attempts to deliver areas of concentrated light in the screen while maintaining a slim form-factor.

For the most part this system performs admirably, and creates fantastically bright images that have real punch and intensity to them.

But the system does have it's issues with keeping this brightness to the bright areas of the image, where it can occasionally see this light 'bleed' out into darker parts of the image.

Thankfully this set is also no slouch in the sound department; it's happily one of the better sounding TVs out there.

So the XE93 is a great looking set, but while it may be much more premium than the XE90 listed above, it doesn't quite go all the way in justifying its increased cost.

Sony turns to the bright side using its Slim Backlight Drive

Android TV continues to frustrate, and there’s a backlight clouding price to pay for the TV’s high brightness levels. That said, Sony's X9300E series nonetheless improves on Sony’s 2016’s Slim Backlight Drive models in every way, delivering in the process some of the most spectacular pictures ever seen on a TV in 2017.

QLED is delivering on Samsung’s promise of better, brighter screens at a more affordable price, with the Samsung Q7F leading the charge as the manufacturer’s entry-level set.

Unfortunately, though, the Samsung Q7F QLED is an extraordinary TV hindered by ordinary issues. It’s one of the brightest, most colorful and we daresay one of the most enjoyable TVs to watch from Samsung in 2017. And while it would be nice to unequivocally recommend it, some damning black level performance, issues with off-axis viewing, audio and operating system performance keep on the most beautiful TVs from being one of this year’s best.