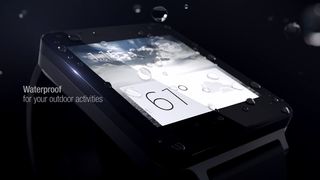 LG's making a splash. Get it? Because of the water and the splashing

LG has revealed a new promo teaser for its Android Wear-powered LG G watch, exhibiting the upcoming wearable from a few more angles.

"LG defines the smartwatch," says the video, which boasts about the device's "sleek and lightweight" design and finishes by giving us another glimpse of the gold variant.

Sure, it's no Moto 360, which breaks the square-shaped mould in favour of a circular watch face, but we're still excited to try it on.

Fingers crossed we hear more about the G Watch, including a firm release date, at LG's big May 27 event, where the LG G3 is also set to touch down.