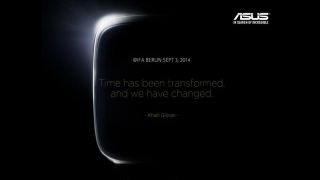 Asus, always one with a taste for the theatrical, has just dropped a dramatic teaser for its IFA 2014-bound smartwatch.

Tweeted from its official account, the image shows the silhouette of a square-faced watch with the words "Time has been transformed, and we have changed" written across the face - a quote from Lebanese-American poet Khalil Gibran.

Why are we so interested in Asus' wearable offering? Because word has it that this will be a budget Android Wear device, possibly the cheapest yet if we're to believe Asus CEO Jerry Shen, who promised a "relatively low price tag".

Asus was announced as one of the partners for Google's wearable OS, so we've been expecting an Asus-flavoured smartwatch for some time now. This new teaser confirms that it's now just over two weeks away - the Asus press conference takes place on September 3.