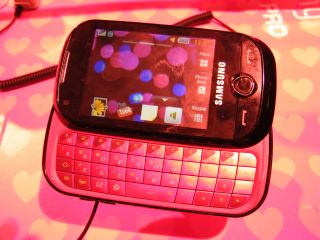 The Samsung Genio Slide has arrived in the UK, with the youth targeted handset exclusive to Vodafone for the first month.

Samsung's Genio Slide - AKA Samsung Genio Pro - has a full slide out QWERTY keyboard and, according to the press release, is 'aimed at the youth market'.

"The Genio slide features a slide out QWERTY keyboard as well as a full-touch screen, giving people the best of both worlds," says Samsung.

"The QWERTY keyboard slides neatly underneath the handset, so the phone can be used as a full touch screen device, and when users want the keyboard they can simply slide it out and turn the phone horizontally."

"We've enjoyed huge success with Genio touch and Genio qwerty and, as a hybrid of the two devices; we know it will be a hit with the target audience."