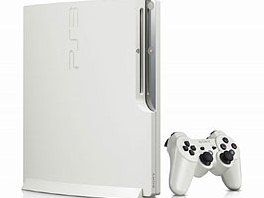 Sony is set to launch a 'Classic White' PS3 in Japan and bump up the storage capacity on its games console to a maximum 320GB later this month.

Sony Computer Entertainment is also set to release a bundle of the 160GB black PS3 along with the digital terrestrial tuner accessory which lets viewers watch and record TV in standard or high definition. That bundle will set Japanese telly addicts back 36,980 yen (£277).

The previous 120GB PS3 will be phased out in Japan. No word from Sony Computer Entertainment Europe on plans to bring the 320GB black PS3 or the 160GB white PS3 to the UK. Yet.

In other PlayStation in Japan news, Sony has confirmed its Move launch titles for its homeland, as well as details on Move hardware and software bundles.

Andriasang notes that the following titles will ship in Japan alongside Move's October 21 launch:

Following those Japanese launch titles, the following Move titles are set to arrive later in the year or earlier in 2011:

Sony is also set to sell Resident Evil 5 Gold Edition and Big 3 Gun Shooting as part of its Move bundles at the Japanese launch of the new motion-control tech later this year.

The PlayStation Move Resident Evil 5 bundle is set to cost ¥7,980 (£60) for which Japanese PlayStation fans will bag the Motion Controller, a PS Eye camera and a copy of the game.