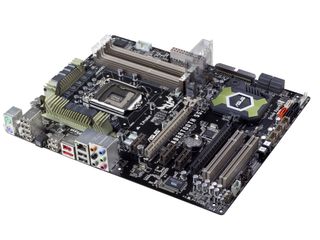 Asus has unveiled the first motherboard for The Ultimate Force (TUF) range – with the Sabretooth 55i specially designed for power users.

Billed as capable of bringing performance even in extreme conditions, the TUF series motherboards are apparently put through 'military style' testing.

The Sabretooth 55i model is, as the name suggests, built around Intel's P55 chipset for Core i7 and Core i5 processors, and takes advantage of the CeraM!X heatsink. And direct memory cooling.

"These perform robustly even under the most demanding conditions. For example, all its capacitors have undergone thermal shock tests to ensure continuous, stable operations during rapid temperature changes in the 60C range.

"In fact, all its capacitors and VRM MOSFETs have been certified for military-level use through stringent testing."

It's certainly a nicely spec'd MoBo, although UK release date and price have yet to be released.