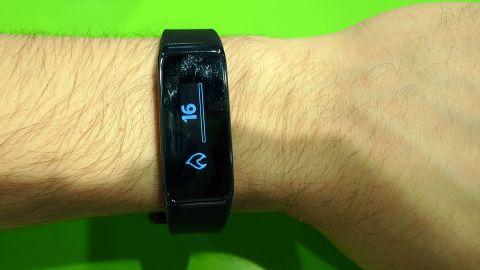 Acer's latest crack at the wearable market sticks is not so much a new product and more an upgrade. Which is to say, even those of you who owned the first Liquid Leap might struggle to distinguish this from the original.

The Leap+ plus comes in a variety of colours, and the design is minimalist and simple. It's what an estate agent would call a 'seamless, flowing design aesthetic' and the rest of us would call 'pretty uninteresting'. The band itself is solid enough, and the rubbery silicone strap is comfortable around the wrist.

That's not necessarily a bad thing. It has a decent repertoire of features, including step-counting and sleep-tracking, and will approximate your activity to give you a rough idea of your daily calorie burn.

The 1-inch OLED touchscreen lets you swipe through the functions and check your current step and calorie totals, with the unit itself popping out of the strap - though we're not immediately sure as to why. The band uses low-energy Bluetooth 4.0 to preserve battery whilst playing nice with iOS, Android and Windows Phone. And it's IPX7 water-resistant too

There's a slew of similar products on the market, including the Garmin Vivosmart, Fitbit Charge and Jawbone UP24, but the Liquid Leap+ looks equal to those.

Here's the kicker though. Liquid Leap+ goes on sale later this month in Europe, for the grand price of €79 (about £60, US$90, AU$115). That's a price that makes it really competitive against those similar bands, so Acer's minimalism might just make it a winner.