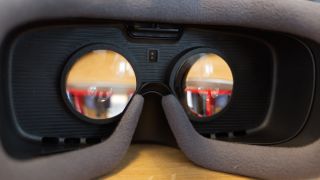 Samsung is throwing a curveball into VR headsets.... or at least, a curve. The technology manufacturer has filed a design patent for a future VR headset, one that makes use of a curved OLED display instead of a flat screen.

We've already seen high-quality OLED displays in VR with the Samsung HMD Odyssey or VR Hero Plus, while Google is also looking to bring the 'organic' display technology to bear in its VR headsets.

While the patent application isn't a guarantee we'll see a curved display model, companies are fiercely competing for a hold in the VR market, at a time when countless models are available but have yet to truly take off in terms of consumer interest.

Samsung has made no secret of its ambitions in VR, with a host of virtual reality or mixed reality headsets like the HMD Odyssey or Gear VR, and plans to create a series of VR-exclusive TV shows to offer through its devices.

So why a curved display? Samsung is notable among TV manufacturers for making one fifth of its television range with curved displays - such as the Samsung NU7300.

Curved displays are thought to better recreate the peripheral vision of round human eyes, as well as give a wider viewing angle, though they can struggle with more light distortion than flat screens in bright environments.

Outside light shouldn't be an issue inside a VR headset, and the curved display may help to give a more realistic 3D experience - while expanding the field of view to a fuller 180-degrees than you'd get with a flat screen.

So is Samsung innovating for the future, or coming at VR from the wrong angle? We'll find out as and when this curved display comes to market - if it does at all.