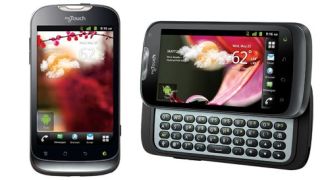 T-Mobile is announcing a pair of new myTouch smartphones - the new myTouch and myTouch Q built by Huawei - that have a spate of new features, but one noticeable omission.

Neither of the new T-Mobile smartphones will have Android's lastest OS Jelly Bean, or even Ice Cream Sandwich.

That disappointment aside, the new myTouch and myTouch Q smartphones will come with Android 2.3 Gingerbread at launch, but offer other improvements over the handsets which use the same name from last year.

While last year's myTouch handsets were built by HTC and LG, this year's models come by way of Huawei.

Both handsets are nearly identical when it comes to specs, with the myTouch Q offering a four-row, slider QWERTY keyboard for those averse to software keyboards.

This year's myTouch models improve on the previous models by bumping up to a 4.0-inch WVGA at 480 x 800 with a 1.4GHz processor and five-megapixel camera.

A front-facing camera and 1500mAh battery are the only other key features of both myTouch handsets, which will take advantage of T-Mobile's HSPA+ "4G" network.

Available on August 8, the 2012 myTouch will be available in black or dark red, while the myTouch Q comes in black or white; both sell for $49.99 with a new two-year agreement.