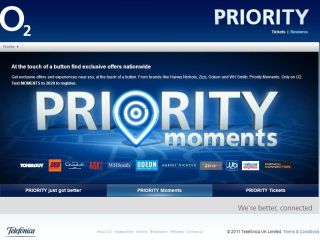 O2 launches Priority Moments - it's not a snack

O2 has announced its new service, Priority Moments, which it hopes will encourage users to start using vouchers on the go more effectively.

The new offering is now available to download as an application for Android and iPhone users, while other handsets can access the service via a mobile site.

Priority Moments will offer discounts and freebies for a variety of high street outlets, including WH Smiths, Zizzi, Harvey Nichols and Odeon.

The service works either through GPS to work out a user's position, or if they are using a non-smartphone, cell-tower triangulation to make sure the offers are relevant to them.

Users can then select by category and see the three closest outlets of their chosen brand, and O2 told TechRadar that the listing would also be ordered intelligently so offers that are time of day dependent will be given a higher priority.

The service mimics Facebook Places with its Deals functionality, but will be given a bigger marketing push by O2 to help users understand the range of deals that are in place.

There are currently 30 big brand names signed up to bring deals to users, but O2 tells us that this will increase in the future as the service beds in.