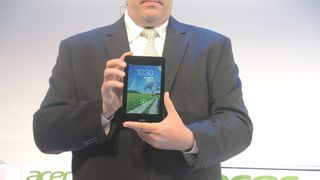 An Intel processor and HD screen? We'll take it

Acer has announced the Iconia One 7 tablet, which packs in a sharper screen than its very recent B1-720.

Acer's also upping the speed by putting in a Intel Atom Z2560 processor, along with 1GB of RAM. The tablet ships with Android 4.2, but that can be upgraded to KitKat.

However it's the inclusion of an Intel processor at an affordable price point that's got us interested in this slab - especially as prices will start at $130 in the US this May. We expect other countries will get it soon after.

Finally, it'll offer seven hours of battery life and comes in 10 available colours - because a bit of choice never hurt anyone.

That wasn't all from the tablets though. Acer also announced the Iconia Tab 7, which rocks an aluminium chassis and a 1280 x 800 display.

It doesn't quite match the One 7 in power though as Acer has opted for a quad-core Mediatek processor instead. But most intriguingly, it offers up 3G connectivity for anyone who really fancies using it as a phone.