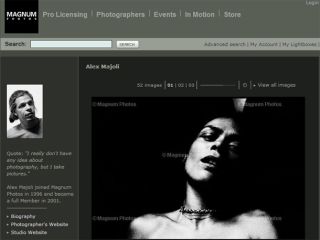 Digital Camera World has interviewed some of the best and most famous photographers in its time. Martin Parr, Rankin, David Doubilet, Jill Furmanovsky, even celebrity photographers like Bryan Adams (yes, that Bryan Adams)... it's an impressive roster of talented lensmen and lenswomen.

Here, we gather together some insightful words of advice from more than 50 of our interviews. Famous photographers from a wide range of disciplines offer their top tips and photo ideas, as well as provide insight into the best practices that helped make them famous.

Professional photographers of all tastes and abilities will be inspired to shoot better portraits, landscapes, travel and wildlife shots, and more...

Born in Surrey in 1952, Martin Parr is one of the UK's most famous photographers. He studied (and taught) photography at Manchester Poly in the 1970s. Career highlights include an Arts Council Award in 1975, full membership of Magnum Photos and a retrospective at the Barbican in 2002.

1. Make sure people aren't smiling. Otherwise you end up with a snapshot.

2. Move in closer when you're taking people shots.

4. Then make sure people aren't smiling again. This is the biggest error in portraits taken by amateurs.

5. For candid shots, just keep persevering. Your luck will come in the end.

John Rankin Waddell, aka Rankin, was born in Glasgow in 1966. He originally studied accountancy at Brighton Polytechnic, but changed to a photo course at the London College of Printing. Rankin co-founded seminal style magazine, Dazed & Confused, in 1991 and he's a contributor to Arena, Vogue and other style magazines.

6. You should never think that the camera is the most important thing. You need to simply find a camera that you enjoy using and stick to that. You should just use the camera as a tool.

7. You need to experiment and take risks. This is what we did in the early days of Dazed & Confused. Take risks. Look at good work being done by other people, but never copy.

8. You need to think about light all the time. Photography is about light, and it can come from any source - the sun, a candle, a computer.

9. Try to engage with the subject. You have to like people to do my job. You need to look outside of the lens, get the relationship going, and only then take the photograph.

Wildlife photographer Vincent Munier is one of France's most famous photographers. Munier hails from the isolated Vosges Mountains in South West France, and was inspired to take up photography by his naturalist father, Michel. His work has appeared in National Geographic, BBC Wildlife magazine and more, and he's won several high-profile international prizes, including the BBC Wildlife Photographer of the Year 2006 (bird category).

10. You can't rush nature photography and you really have to watch your subject for a long time in order to understand its behaviour.

11. You need to know when it's the perfect time to take the shot. I try to use only natural light and avoid heavy digital enhancement.

12. Spend time studying the species and habitat you're shooting. Try to visualise how you're going to take the shot before you do so.

13. Never disturb the animal or its habitat to get the shot.

Nick Danziger was born in 1958. He published the best-selling Danziger's Travels in 1982 and went on to write other award-winning books and direct documentary films. He's won first prize in the World Press Photo awards (portrait division) and his 'Blair at War' collection was exhibited at the National Portrait Gallery.

14. Be engaged with your subject, but at the same time be considerate - you are the guest.

15. Think about combining the composition of the shot with the context of where you're taking it. The two shouldn't be separated.

16. For my kind of work, I try to use natural light wherever possible. It's more natural!

17. Ask permission to get in close. It's much better than trying to shoot people farther away.

18. I only use Photoshop very sparingly as I believe I shouldn't add or remove anything from the kind of portraits I take. I just use software for dodging and burning in black and white for example.

Bob Martin is one of the most successful freelance sports photographers in the UK. His work has taken him all over the world, and his photographs have been published in numerous publications including Sports Illustrated, Time, Newsweek, Life Magazine, Stern, Paris Match, Bunte, L'Equipe, The Sunday Times and The New York Times. Martin has received more than 50 awards including the 'Sports Picture of the Year' in the World Press Photo Awards, 2005.

19. Pre-empt the action. Even the fastest SLRs will have a delay.

20. Never forget about composition. The background is crucial (for more on composing images, check out our 10 rules of photo composition - and why they work).

21. Make sure the subject is big enough in the frame and think about what the subject will do next.

22. When shooting sports, you must have the right lens on a camera at the right time - there's no time to change lenses.

23. Learn how to shoot in RAW. You won't get the most from your photography if you only shoot JPEGs.