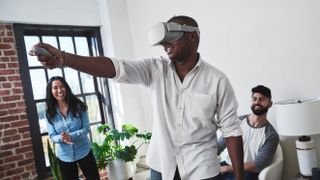 Oculus, owned by Facebook, is one of the biggest names in home virtual reality technology, and for good reason. Despite being among the most affordable options on the market, its headsets make no compromises; all are well built and easy to use, with a huge array of games and other experiences to enjoy.

Oculus Go, released a few months ago, was a revelation - a truly standalone headset that doesn't require a high-powered PC. Visually, it offered almost the same experience as Oculus Rift, but for half the price.

However, with the forthcoming release of Oculus Quest - a wireless VR headset offering six degrees of freedom tracking - should you pull the trigger on an Oculus Go now, or wait until the new hardware is available?

Update: Rumors are circulating that the PC-tethered Oculus Rift 2 might be cancelled following the news that Oculus co-founder and former CEO Brendan Iribe is leaving Facebook. However, Iribe's co-founder Nate Mitchell has reassured VR fans that the company will be pressing ahead with new hardware, games and other content.

Iribe's departure may signal a move away from development of the PC-based Rift headsets to focus on standalone devices like Go and Quest.

Upon its launch, Facebook called it the most approachable VR product on the market - and it wasn't exaggerating. Oculus Go represented a turning point for virtual reality - a standalone unit that delivers an experience far superior to smartphone-based devices like Google Cardboard.

Its design is sleek and minimal. It attaches to your head with thick elastic straps, and although it might sit a little heavily, these generally keep it securely in place. The interior is soft and comfortable around your eyes (Oculus says it consulted clothing manufacturers to make it as pleasant to wear as possible), though you might notice some light leaking in around the nose, which some people find distracting.

The headset provides sound via speakers built into the plastic arms that support the straps, and the package includes a neat little controller. It doesn't track your whole arm in 3D space, but it's convenient and easy to use as a pointer or virtual gun.

That brings us to Oculus Go's main drawback: although it can produce an experience on a par with much more expensive headsets like PlayStation VR, it only offers three degrees of freedom of movement. In other words, although you can look around and see a virtual world from any angle, moving forwards or back won't have any effect.

That's not necessarily an issue, though, and if you're new to VR then you might appreciate a device that lets you enjoy the experience while simply sitting on a swivel chair.

If you're thinking of getting into VR, price will be a major consideration. Oculus Quest will be priced at $400 at launch, which will probably translate to £400 in the UK and AU$600 in Australia if normal pricing conventions are anything to go by. That's still quite low for a high quality headset, but Oculus Go is currently available for $200/£200/AU$300 and might be discounted even further for Black Friday.

Retailers often offer heavy discounts on games and console bundles for Black Friday and Cyber Monday - particularly hardware released over a year ago. That, plus the imminent release of Quest, makes Oculus Go a prime target for discounts.

A top quality headset doesn't mean much without great games and other VR experiences to go with it, and this is where Oculus Go really excels. There's a huge amount of content available for Oculus Go. Over 1,000 apps and games were available at launch (both free and paid), hundreds more are available now in the Oculus Store, and there's a steady flow of new releases

Oculus Go is the headset of choice for many game developers and content creators who want their work to be available to as many people as possible, including the BBC's VR Hub, which used it for its recent immersive pieces Nothing to be Written and Berlin Blitz.

“I think the Oculus Go is really interesting,” says Lysander Ashton, director of 59 Productions, which worked with the BBC VR Hub on Nothing to be Written.

“Until I did this piece, I wasn’t interested in doing anything that wasn’t for six-degrees-of-freedom headsets, but the quality of the optics and the whole package made me think that it makes a lot of sense to do something for this level of headset, because you can get the audience out there.

Oculus Go is also among the headsets supported by Mozilla's new Firefox Reality web browser. If you decide to snap one up now, you won't need to worry about the supply of new games and other apps drying up any time soon.