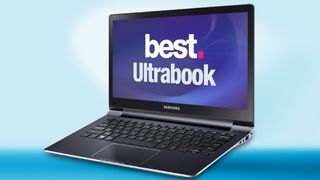 These are the top 5 Ultrabooks that we've reviewed so far, always updated

Although they were originally conceived to compete with the likes of Apple MacBook Air, ultrabooks now stand on their own in the market. These unique, Intel-based laptops that are thin, light and feature long-lasting battery life, something that laptops running on Windows aren't known for.

A lot of Ultrabooks not only measure in at under an inch thick, but they’re also capable of carrying out tasks rather swiftly. Whatever your needs may be, you can be certain that one of top Ultrabooks listed below will meet them.

The best laptop on the planet, Dell's latest Ultrabook is a masterpiece

The new, 7th-generation Intel Core i-powered Dell XPS 13 is nothing short of a miracle, in terms of both design and pricing. Once again, Dell has done the universe a favor by squeezing a 13.3-inch display into a measly 11-inch figure, and weighing in at only 2.9 pounds (1.29kg), the XPS 13 is blessed with extravagance.

The Dell XPS 13 not only bears a lengthy battery life exceeding 7 hours in accordance with our in-house movie test, but it does so with a virtually bezel-less InfinityEdge display.

What’s more, not only is the starting cost of the laptop relatively low, but the Dell XPS 13 is sold in a variety of different flavors, all the way up to an i7-7700U model.

And to top it all off? It comes in Rose Gold.

Among the first to sport 7th-generation Kaby Lake processors, the HP Spectre x360 is more than a CPU upgrade. Sure, the 2-in-1 zips by faster than it did last year, but it’s also thinner and lighter than it was before – not to mention more stylish. From the revamped HP logo on the outer shell to the higher quality keyboard, the Spectre x360 is a force to be reckoned with.

Two USB Type-C ports are present while only one traditional, USB Type-A port is onboard. Sure, this equates to better transfer rates, but it also necessitates the need for an onslaught of new cables and peripherals.

The Spectre x360 is a thrifty little Ultrabook no matter what your use case, made even better by the recent addition of a 4K display option paired with an optional 1TB of SSD storage.

A truly excellent ultrabook at a very agreeable price point

Sporting an 8th-generation Intel Core i5 and Core i7 configurations comparable to the top-notch Dell XPS 13 and an all-aluminum shell, this is one of the few Asus laptops that can truly vie for the MacBook Air’s throne.

And that’s thanks to the Asus ZenBook 13 housing all the latest ports, including USB Type-C, and the option of a gorgeous Full HD display, complete with 143-degrees of rotation and a serious case of the anti-glare.

One of the most affordable ways to get into Ultrabooks

The Acer Aspire S 13 may not win prizes for being the thinnest or the lightest Ultrabook around, nor does it offer more than 10 hours of battery life. But it's an impressive machine none-the-less with speedy and reliable performance. It's nearly as affordable as the Asus ZenBook UX305 and the touchscreen is standard, something you won't find on most budget Ultrabooks.

Thin, light and handsome, if not short-lived

It’s no surprise that the world’s thinnest laptop doesn’t come without its own share of port shortages; however, it’s also unfair to judge the Acer Swift 7 by its pair of USB-C twins alone.

Sporting an Core i5 processor from Intel’s 7th-gen Y-series lineup (previously Core M), the Swift 7 is by no means a powerhouse, but it doesn’t need to be, really.

The Acer Swift 7 is a testament to just how luxurious a laptop can look and feel without facilitating a lofty price tag. It also serves as a reminder that everything looks better in gold. Though admittedly short on battery life, clocking in at only 5 hours and 41 minutes in our in-house movie test, the Acer Swift 7 soars in areas such as portability and style.

Elegance meets horsepower with this hardy 2-in-1

The Lenovo Yoga 910 is a fine example of a laptop that takes two steps forward and one step back. It may be heavier and colder to the touch than the Yoga 900, no thanks to its aluminum finish, but it’s also substantially more stylish. Not only that, but Lenovo even managed to keep the same frame size and fit a larger, 14-inch screen inside it.

As a result, it’s still not perfect, but the Yoga 910 is – rest assured – a clear upgrade over its predecessor. Because it’s wholly adorned with sharp angles galore, the Yoga 910 is a feat in fashion. Plus, it doesn’t hurt that it’s outfitted with a 7th-generation Intel Core i7 processor and the option of a 4K screen. Unfortunately, even though the battery is larger, its longevity is underwhelming.

One glance at the HP Spectre, and you'd think it belongs in a mansion. As if looks weren't enough, this gilded machine is actually more powerful than the latest MacBook and for a lower price at that.

You won't find laptops thinner than this and with an optional Intel Core i7 configuration to the trio of USB-C ports, it's supremely capable and not to mention future-proof. Even when it only boasts a 1080p screen, it renders deeper blacks and brighter colors than most.

If there were ever a such thing as a MacBook killer, it would be called the HP Spectre – front and center, folks.