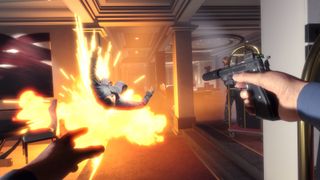 Sony has promised that it will bring more than 130 new games to the PlayStation VR before the end of 2018.

Talking with Nikkei, Sony said that a big reason for this show of faith in the virtual reality platform is because it’s been selling so well. It’s true - in December 2017 it was revealed that more than 2 million PSVR headsets have been sold.

Although this isn’t really a patch on the 70 million PS4 consoles that have been sold to date, it is a large enough install base for Sony to justify investing development money as well as draw in more third-party developers.

It's been noticeable at events such as PSX, Paris Games Week and E3 that Sony has been dedicating more presentation time and floor space than it used to for the VR headset. This is something that's likely to increase again this year.

The growth to 2 million sales has been rather slow but the PSVR is the most successful high-end VR headset on the market by a clear margin thanks to its accessibility - the PS4 is currently the only console with dedicated VR experience and price cuts over the Black Friday and Christmas periods made it even more appealing.

At the moment there are already 150 PSVR games available, but with this commitment, Sony will see that number grow by 86%. Growth drives growth, so if a reasonable number of these games prove to be successful, Sony could see the headset’s base grow even further over the next 12 months.