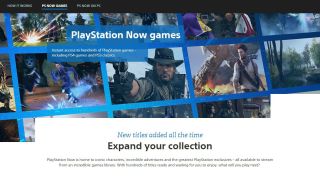 Sony has slashed the prices of its PlayStation Now streaming service for games, bringing down the cost to match its Xbox Games Pass rival.

What's most notable about this, though, isn't just the saving, but how it drags down the price to match Microsoft's competing Xbox Games Pass service – currently $9.99 / £7.99 a month.

What's the difference between the two services? PS Now is primarily a streaming service for games, though some games can be played offline to stop you being at the mercy of your internet connection. Xbox Games Pass allows you to download all the games in its library, without the streaming option, though that library of 250 titles is much smaller than PS Now's 800 games.

All about the games

The pricing announcement from Sony also came with news of some acclaimed AAA games coming to the PS Now service, including God of War – which we named the Best Game of 2018 – and Rockstar's GTA 5. Until either GTA 6 or God of War 2 are officially announced, using Sony's streaming service will likely be the most cost-efficient way to delve into the latest entries in each long-running franchise.

Earlier in the year PS Now also added DOOM, Wolfenstein, and Fallout 4, adding up to an increasingly blockbuster selection of games. When you consider the total catalogue is around three times that of Xbox Games Pass, and PS Now looks like a better proposition than ever.