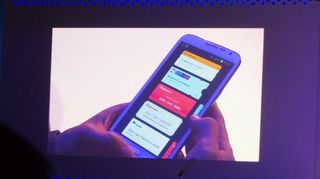 Samsung Wallet is the company's answer to Apple's Passbook

It appears the copying machines are firing up in South Korea, with Samsung replicating Apple's iOS 6 Passbook app for its future Android handsets.

The Next Web reported Wednesday that Samsung has unveiled a new ticket and coupon management app for Android, and this one is likely to look familiar to iPhone users.

The move isn't much of a surprise considering the term "Samsung Wallet" was listed in a U.S. trademark application nearly a year ago.

Although the open Samsung Wallet API is still in beta, the company is accepting early developer sign-ups ahead of a March 7 launch.

Samsung Wallet even replicates the smaller details of Apple's app, including time and location-based push notifications which alert users when they're near a favorite store.

Like Passbook, Samsung Wallet is not yet enabled for near-field communication wireless payments, but the company is expected to eventually implement the technology thanks to an existing partnership with Visa.