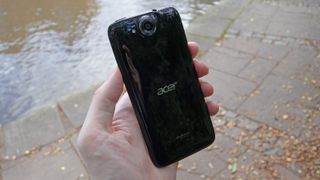 Acer has put out some decent Android phones, and Windows is next

Acer's current smartphones, like the Liquid E3 and Liquid Jade, aren't terrible, but they haven't exactly made a splash either.

Nevertheless the Taiwanese company is going to keep at it, with a batch of new Windows phones it will reveal at MWC 2015.

That's what Acer CEO Jason Chen said during a conference on January 22, DigiTimes reports, confirming rumors from December that Acer would get back on board with Windows Phone in a big way in 2015.

Considering Windows Phone as a platform just died, though, the devices will most likely be running Windows 10 for phones.

Sticking with the low end

Chen said Acer will continue to focus on entry-level smartphones and launching in more countries.

He also revealed that a "high-end smartphone vendor" is apparently interested in buying the company's smartphone business, and while that won't happen for now a merger isn't out of the question.

The new phones will reportedly be paired with Acer's Build Your Own Cloud platform when they debut at MWC in March.