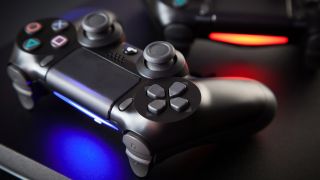 Despite the cleaner asking people not to share the images, they obviously made their way to Reddit where posters began speculating, not only about the kit itself, but about the controller attached and whether it could be the PS5 controller. We don't think it is the controller, though, and here's why.

Let's break it down

The leaked images are very similar to those that we've seen before. The dev kit looks the same, a bulky V-shape with a disc drive in the front and a small screen. What we already know about the PS5 dev kits is that the final model is very unlikely to look like that. As the leaker pointed out in these photos, this is prototype 1. So the final model will look different to that, just in case you worried that thing would end up underneath your TV.

What's potentially more interesting is that these images give us a much closer look at the controller attached - which some are speculating to be the PS5 controller. But there are plenty of signs that this isn't the case.

While the gamepad in these images doesn't seem to be the PS5 controller, then, there is some good news. If the PS5 dev kit is being tested with a DualShock 4 controller then it suggests that the next-gen console could support backwards compatibility for PS4 accessories.

That would make sense, seeing as Sony has already said PSVR will work with the PS5 and rivals Microsoft have announced this feature for Xbox Series X. It would also be welcome news as it means we won't have to upgrade all the PS4 controllers we have at home right now - hopefully, anyway.

The truth is, we won't actually know until Sony officially unveils the PS5. With the next-generation PlayStation releasing in late 2020, we're hoping we don't have to wait too long.