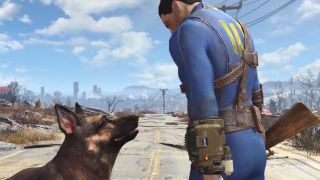 Fallout 4, released this Tuesday, is already a massive success for Bethesda. Who'd have thought?

Bethesda announced today that the launch of Fallout 4 was a rousing success, with approximately 12 million copies shipped around the globe, amounting to over $750 million in sales, (which comes out to around £493m and AU$1.05b.)

"Major retailers have informed Bethesda of the tremendous consumer interest in Fallout 4, with some noting it was the most pre-ordered game this year," said the Maryland-based developer in an official press release. "In addition, the Fallout 4 Pip-Boy Edition was the fastest-selling collector's edition of any game in history at leading retailers."

Making nearly as much at launch as Grand Theft Auto V, the Guinness World Recorder holder for best-selling game in a 24-hour span, the latest installment of the irradiated RPG has easily become the highest-grossing game launch of 2015.

Fallout 4's numbers are especially impressive considering it beat out Halo 5: Guardians, which released on October 27 and had the biggest launch in the series' history, and Call of Duty: Black Ops III, which made more money in a weekend than any other entertainment media of the year last week.

On top of the excellent sales for both Fallout 4 and its collectible Pip-Boy Edition, Bethesda also reported that the Pip-Boy companion app rocketed up the charts of both the Google Play Store and the App Store. Given Fallout Shelter's success on both iOS and Android, mobile has been a major part of building hype for the nuclear franchise, even going as far as to make an appearance on Tinder.

"After four years of development, it's not complete until our fans get to play it and make it their own," said Fallout 4 Director Todd Howard, extending "a huge thanks" to fans in the press release. "We can't wait to hear about their adventures."

Fallout 4 is available for purchase and digital download for the Xbox One, PS4 and PC. Fallout Shelter, the official Pip-Boy app, and even Fallout C.H.A.T., which allows you to bring Vault Tec-themed emojis to your friends, are available to download for free on iOS and Android.