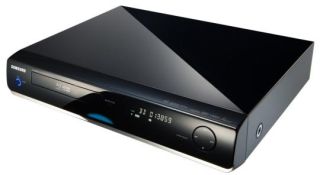 The Samsung BD-UP5000 is slated for a December release

There's been a lot of speculation surrounding the future of Samsung's upcoming Blu-ray/HD DVD combo player of late. Dubbed the BD-UP5000, the high-end player was throught to be the victim of a cancellation. Interestingly enough, its little brother, the BD-P2400 - a step-up from the BD-P1400 that can only play Blu-ray movies - has actually been cancelled.

According to Samsung, the BD-P2400 had little place in the market and it chose to follow through on its commitment to the BD-UP5000.

Echoing this sentiment, Samsung announced that the Duo HD player will be available to consumers by mid- to late December and will be BD Profile 1.1-ready. But because Profile 1.1 discs are currently not available, Samsung promised a January 2008 firmware upgrade to allow playback of BD Profile 1.1 when those discs are released.

Aside from the slightly delayed release, Samsung's decision to endorse the combo player should be a welcome addition to consumers looking to have a single player that is capable of playing both Blu-ray and HD DVD movies.

There is currently no word on pricing, but Samsung expects to make all details final by the end of next month.