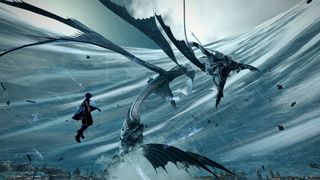 Xbox Games Pass is expanding. On the eve of X019, the annual event for all things Xbox, the bigwigs at the gaming platform saw fit to announce a new fleet of titles coming to its subscription-based game library, Xbox Games Pass – with some already being available.

Subscribers can now play Avalanche Studios' wasteland shooter Rage 2, as well as the critically-acclaimed 3D puzzle game The Talos Principle, among others. And if they don't whet your appetite, there are over 40 other titles that have been announced for Xbox Games Pass in the coming year, from The Witcher 3: Wild Hunt which, yes, is on basically everything these days) to episodes 4-5 of narrative adventure Life is Strange 2.

But perhaps the highlight is the sheer number of Final Fantasy games coming to the service – including Final Fantasy 7 (not the 7 remake), Final Fantasy 8: Remastered, and Final Fantasy 15, but there's a whole load of other FF titles making Xbox Games Pass a must-have choice for fans of the franchise.

There were already plenty of reasons to subscribe to the service, which gives access to over 100 Xbox One games for a monthly subscription fee of $9.99 / £7.99 / AU$10.95 – a price that the competing PlayStation Now service has recently matched.

Microsoft has also been pushing Xbox Games Pass with brand-new titles being available from day one, such as the tentpole shooter Gears 5 or Obsidian’s sci-fi RPG The Outer Worlds.

We don't have exact release dates for most of the incoming games, though we know some will be coming before the year is out – and you can see the full list of announced games below.

Some will land this side of 2020, some will land once we've entered the new year, but you can expect all of them within the coming months.

Titles certain to drop in 2020, most likely in the latter half of the year.

Alas, it's not all good news. If you were enjoying or looking forward to any of the games below, they'll be departing the service on November 30.