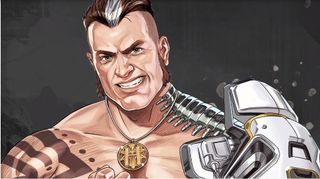 Apex Legends is celebrating its first anniversary, and what better way to honor the occasion than to add a brand new Legend to the roster. That's exactly what Respawn Entertainment is doing, among other things.

During a devstream, the developers revealed that it will mark the battle royale's one year anniversary by kicking off Season 4 on February 4. This new season, called Assimilation, will bring with it a new battle pass, weapon and some freebies - but most importantly, it'll add a new cyborg MMA fighter character called Forge.

You can check the full video out below:

Forge is your quintessential buff guy with a cool streak in his hair, a pretty big belt and some tattoos - oh yeah, and he's got a big ol' cybernetic arm too. According to Respawn, he's a "five-time hyper fighting federation champion" who used to take part in a sci-fi version of MMA. So, he's essentially Conor McGregor with extra metal.

We don't know this Legend's exact abilities yet but, from what we gather, he likes to get up close and personal in his fighting style. Apparently his cybernetic arm will also tie in with Apex Legends lore in some way.

In addition to Forge joining the roster, Respawn also revealed that an "all-new" battle pass will be available which will add a bunch of exclusive items. We'll also be able to get our hands on a new bolt-action rifle called the Sentinel.

Ranked mode is also being updated to include a new 'Master' tier between Diamond and Apex Predator as well as limiting the rank of Apex Predator to only 500 player. Things are definitely going to get heated.

You can check out more about these updates on the Apex Legends website.