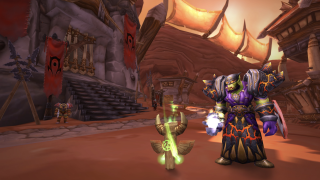 World of Warcraft Classic is getting more realms in an effort to combat the lengthy queues and long wait times which Blizzard fears could disrupt the launch.

In the EU, five new servers are coming: Flamelash, Gandling, Mograine, Nethergarde Keep and Razorgore. All of these are English-language servers, and they are all PvP realms except for Nethergarde Keep.

In the US, there are four new realms to join: Incendius, Bigglesworth, Old Blanchy and Westfall. The first two are PVP, the second pair are normal servers.

Blizzard observes: “At this time, all realms that have a Full or High population tag are expected to experience extended queues. We urge players on realms marked Full or High to plan to play on one of these new realms to avoid the longest queues, and to help spread the player population as evenly as possible and provide the best play experience for everyone.”

The fresh servers are opening their doors five hours before launch (10am PDT, August 26, ahead of the 3pm launch time in the US – 7pm on August 26 in the EU, ahead of the midnight launch, although that’s 6pm UK time).

The broad reaction to the move has been positive, as the recent news of queues of possibly ‘several hours’ has been causing more than a degree of concern among the WoW playerbase. And many folks are simply glad that they aren’t going to be facing a lengthy wait before they can actually play.

On the other hand, some players think Blizzard is overreacting, and that there are too many servers now, with the prospect of some realms being pretty much dead down the line, when the initial rush of interest in WoW Classic inevitably dies down somewhat.

Clearly, though, Blizzard has judged it too much of a risk to have the launch blighted by huge waiting times for login.