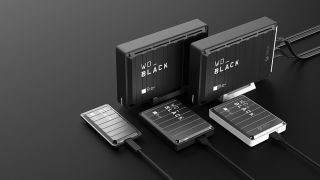 If your 1TB Xbox One S doesn’t have enough storage for all your Xbox Game Pass titles, hard drive manufacturer Western Digital has a solution – a massive 12TB external hard drive that it’s making in collaboration with Microsoft.

Its official name is the WD Black D10 Game Drive for Xbox One and it’s making its debut at Gamescom 2019 in Germany this week.

According to Western Digital, the hard drive can store every game on Xbox Game Pass (up to 300 games) which is good considering the WD Black D10 also includes a three month membership of Xbox Game Pass Ultimate for a limited time.

In terms of specs, the WD Black D10 has speeds up to 250Mbps/7200RPM and uses Western Digital’s active cooling technology to keep the hard drive humming for years to come. (That said, if it fails Western Digital is giving folks a three-year warranty.)