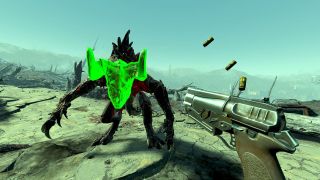 When Microsoft’s E3 2017 rounded off, all puffed up and proud of the Xbox One X reveal and its beefy hardware specs (well, beefy in the context of consoles, at least), whispers were abound that VR was going to go the way of rhythm action games or the unloved stepchild that was PS Vita - loads of launch fanfare followed by a painful descent into obscurity.

Thankfully, the keynotes that followed over the next few days settled those fears and proved both developers and publishers have plenty of faith in the platform. Sony noticeably spent a far smaller chunk of its keynote showcasing its PlayStation VR titles, but the software it did show looked great. So perhaps we’ll chalk that up to the firm’s machine gun approach to trailer reveals.

Everywhere else VR was as big business as ever. Sure, the honeymoon period is well and truly over but we’re seeing virtual reality support across the board for Oculus Rift, HTC Vive and PSVR. The problem is, now that VR has settled into the landscape of the industry, it’s beginning to absorb some of the less savoury realities of modern gaming.

So let’s about Bethesda. The incredibly talented studio-cum-publisher showed off some truly amazing projects at its bespoke E3 2017 show. Bethesdaland had Wolftenstein 2: The New Colossus dispatching alt-history Nazis with aplomb and Dishonored 2’s new story DLC bringing back fan favourites into the fold.

But then it had those VR contributions.

Bethesda, the publisher that gave us Dishonored, Wolfenstein and Prey, has gone all in with VR and it’s big! It’s huge! It’s… Fallout, Doom and Skyrim on VR.

I can admire the sheer technical achievement of getting something as complicated as Fallout 4 or Skyrim running through the prism of VR, but isn’t porting these well established (and in some cases, considerably old games) just as lazy as publishers re-releasing all their greatest hits on another new or successive platform?

Skyrim is five and a half years old. There’s no taking away the fact it’s one of the greatest games ever made - and perhaps the greatest action-RPG that isn’t called The Witcher 3 - but haven’t we had enough Skyrim by now? We already have a Nintendo Switch version on the way, we don’t need another one on VR.

I understand the motive. The game’s build and assets already exist - Bethesda 'only' had to fund a team to convert and test a version running on VR. It’s a no brainer from a business standpoint, but it sends a very dangerous signal to the rest of the industry. One that reads: “Hey, you know those games that have already sold really well? Port it to VR and make some more money!”

How long until we get Activision deploying Modern Warfare Remastered onto VR? Then every other CoD until VR becomes awash with every game you already own, just with an inflated price tag and a sheer lack of imagination? It’s certainly not a great trend to try and risk kicking off.

But there’s hope elsewhere. Sony, Ubisoft and The PC Gaming Show proved there’s still innovation and imagination to be found within the confines of a headset. Just take a look at what Ready At Dawn is doing with its dual project Lone Echo/Echo Arena.

One one hand you have an action thriller set on a space station mostly inhabited by androids. On the other, you have the first proper attempt to marry VR with the competitive world of eSports. It’s a risky combination, but it’s nonetheless a bold one that’s driven by the desire to do something new with a platform that offers so much space to innovate.

And what about Transference? The new Elijah Wood-backed psychological horror from Ubisoft. We don’t even know what the game looks like yet, but its Black Mirror-style trippiness and self-aware desire to turn VR itself into a device for suspense fills us with a palpable excitement for the future of interactive horror.

Ultimately, there’s more than enough space for known properties and IP to arrive and thrive on VR, but they should be as experiences tailor-made for the platform. Until Dawn, that interactive horror film from 2015 was a surprise hit when it hit PS4, but the version retooled for PSVR just didn’t work. It was an attempt to shoehorn existing assets into a VR experience, and it stood out like a sore thumb.

So now Supermassive is returning to the world of Until Dawn, with The Inpatient. A title-built from the ground up with VR in mind, it’s set 60 years before the events of the original game and looks set to scare the living daylights out of us in a way that’s VR to a tee. Even if the game turns out to be a train wreck, the mindset and intention is exactly where it should be.

Bethesda isn’t the villain here, but wouldn’t we rather see projects greenlit much like The Inpatient? Why not have a new game set within the timeline of Fallout 4? One that’s built specifically for VR, taking into account the limitations of the platform and fleshing out something that multiplies all the areas for potential. A companion piece that’s both an immersive VR experience and an enrichment of an already beloved franchise.

There’s at least some hope with Doom VFR. While its resemblance to the Doom that shotgunned its way onto consoles and PC in 2016 is marginal at best, Bethesda has at least rebuilt the campaign to suit VR, incorporating slow puzzle solving between stretches of teleporting gunplay. It’s one foot in the right direction at least.

Let’s not treat VR like we did PS4 and Xbox One in their first couple of years, pumping them full of HD remakes until the remasters outnumbered the original titles. Let’s have VR continue to be the place where innovation and creativity rule first and foremost, rather than ruining it with the same mistakes we’ve made for generations elsewhere.