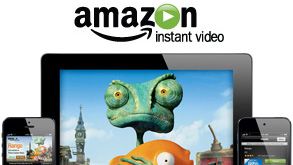 Vids on your idevice

Amazon has brought its Instant Video streaming app to the iPhone and iPod touch, joining the iPad.

The update means owners of the iPhone and iPod touch can now stream and download movies and TV shows to their device.

Videos you've bought through Instant Video using other devices will automatically show up on your iPhone or iPod touch once you log in. And if you're a member of Amazon Prime, you can stream anything from the Prime Instant Video library, which consists of over 30,000 videos, all free.

The app launched for iPad at the end of November.

The Watchlist feature is like a wishlist, keeping track of everything you've tagged to watch later. You can add to it as you go, straight from your Apple device, then open it up whenever you want and dive straight in.

Everything you've bought or rented from Amazon will be stored in a section called Your Video Library, which again, you can open up any time and delve into.

The app is a free download, and will work with the third generation iPod touch and later, iPhone 3GS and later, or any iPad. It's also optimised for the iPhone 5's 4-inch screen.