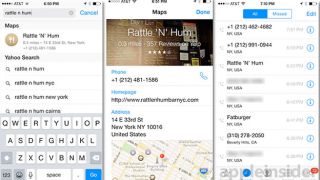 Maps and Phone apps team up for useful new feature

The fifth version of the iOS 8 beta, currently in the hands of Apple's army of developers, has revealed a minor, but neat new feature which improves the synchronicity of the Maps and Phone apps.

An AppleInsider reader discovered when users call a business like a restaurant from within the Maps app, that information will be transferred to the Recents tab within the iPhone's phone app.

Not only is the number listed, but the name of the establishment too. Tapping on the listing will also bring up the location on a smaller map, the address of the business, it's web page and even the Yelp scores.

The idea appears to be to make it easier for iPhone users to easily save their favourite places to the contacts or have the ability to easily redial without searching all over again.

iOS 8 was announced by Apple at WWDC in June and is currently being tested by developers and refined by Apple ahead of a launch this autumn.

The operating system will arrive alongside the iPhone 6, but will be installable across a wide range of iPhones, iPads and iPod touch media players. You can find out which here.