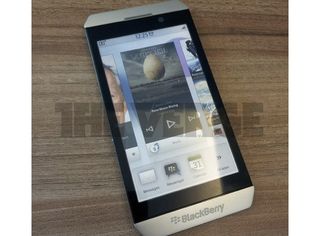 Is this about to get stuck with the worst phone name ever?

RIM's first BBX handset may be dubbed the BlackBerry Surfboard in a move that wouldn't so much say as scream attempted down-with-the-kids-ness.

The handset was originally codenamed BlackBerry London but it seems that RIM has extended an IP filing giving it the rights to the name Surfboard which it originally secured in July 2010.

All hope is not lost, however. Remember the Surfbook? That's what the rumourmill originally had in mind for the PlayBook so it's possible that Surfboard will just die a quiet death.

Let's hope so because we don't want to see a handset that looks quite promising lumbered with such a terrible name.

Photos of the London/Surfboard surfaced recently, alongside claims that it's thinner than an iPhone 4S.

Other spec include a rumoured 3.7-inch screen, 1GB of memory, 1.5GHz dual-core processor and an 8MP camera as well as the BBX operating system.

We're going with wishful thinking and a low, low rating on the TechRadar rumourometer: