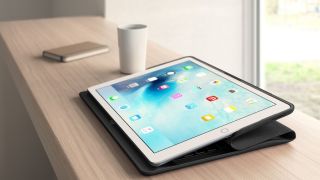 The iPad Pro 12.9 and iPad Pro 9.7 are a pair of powerful, versatile tablets, made even more so by Apple's Smart Connector, which gives you one more way to hook up accessories.

Apple clearly sees them as devices built for productivity, as evidenced by its official Smart Keyboard and Apple Pencil accessories, but the world of iPad Pro accessories extends far beyond Apple's official selection.

Logitech and other manufacturers have created alternative offerings, which are often cheaper or better, or fill gaps that Apple hasn't catered to.

Whether you want to work, play or create on your iPad Pro there's an accessory for you, and these are some of the very best.

Note: we've ranked these from cheapest to most expensive according to prices at time of writing.

An artistic alternative to the Apple Pencil

The Apple Pencil is great for writing and sketching, but if you're more of a painter it's not going to get the job done. For the artistically-inclined among you there's the Sensu Artist Brush and Stylus, which, as the name suggests, has a brush, making it ideal for digital artists.

There's a stylus too if you want to sketch, and in a pinch you can even write with it, although not with as much precision as the Apple Pencil. Still, it's far cheaper, and much better for the artistically-inclined.

Keeps your iPad going and going

The on-the-go convenience of having an extra full charge for your iPad Pro can't be understated, and this Techlink battery bank offers exactly that.

It's got dual USB ports, so you can easily charge your iPhone or whatever at the same time as your iPad, and the Recharge 12000 automatically stops juicing your devices as soon as they're at full capacity, so it won't waste any of its 12,000mAh of power.

Lightning and micro USB cables are included in the box, and while the Recharge 12000 might be a tad hefty at 300g, it also has a clever trick up its sleeve - it incorporates a stand that lets you position your iPad Pro for hands-free viewing of movies and the like while charging takes place.

A stylish case with useful features

If you just want a little protection for your tablet the STM Atlas case will get the job done. An understated slimline fabric design keeps it looking classy, and ensures it doesn't bulk up whatever bag you chuck your iPad into.

It also folds out into a stand, with a hinge allowing you to adjust the landscape angle for comfortable typing or viewing, and there's a slot for the expensive but easily lost Apple Pencil.

With a magnetic closure as well, which ensures the screen is always off when the case is shut and on as soon as you open it, this is a well-thought-out and versatile accessory.

Get a new perspective

Versatile
Compact
Doesn't provide any protection
Only comes in one color

Most iPad stands offer a limited range of positions which, depending on your setup, can make it difficult to get an ideal view of what's on the screen. The Spider Monkey from Octa solves those problems in one fell swoop, thanks to the unlimited degrees of freedom offered by its flexible steel frame.

The adaptive neck can be wrapped and curled around everything from bed knobs to lamp stands, or it can be used just as easily on its own as a stabilizing mount.

The rubber-lined clamp rotates through 360 degrees for quick and accurate adjustment, allowing you to get the best possible perspective whatever you're doing on your iPad Pro, and it coils up compactly and folds away for easy transport, too.

Take your gaming to the next level

All work and no play makes Jack a dull boy, but you can avoid that fate by investing in a Gamevice controller, and making the most of all that power tucked away inside your iPad Pro.

Slotting your iPad into the Gamevice provides you with hardware controls, including thumbsticks, a D-pad, triggers and other buttons.

If you've ever tried to play a first-person shooter with a touchscreen you'll know what a difference having a dedicated gamepad can make – and if you're serious about your iPad games this is near-essential.

Another use for your Smart Connector

The Smart Connector is a smart idea, but for the most part it's only used for keyboards. Logitech decided to improve on that by launching the Base charging stand, which uses the Smart Connector to juice up your iPad Pro.

Magnets in the charging cradle ensure your slate is aligned, making it easier to use than if you had to plug the tablet in.

It looks the part too, with the slim aluminum build of the dock giving it a premium appearance that matches the design of your tablet. And, as a bonus, your Apple Pencil will sit neatly on the front of the Base – we're not sure if it was designed that way, but sometimes that's the beauty of these things.

Steve Jobs famously pooh-poohed the stylus as an input device, but it's difficult to imagine he wouldn't have been impressed with Apple's Pencil, exclusively made for the iPad Pro.

The Pencil's performance as a digital illustration tool is its big advantage over the relative imprecision of finger input.

Its all-round responsiveness easily matches the Surface Pen, but it's easier to control than Microsoft's offering and also easier to use for writing small type. It boasts some very smart palm rejection, too.

A bag that's almost as high-end as your tablet

This "valet service for your tablet" by Pad & Quill isn't cheap, but it is made with the company's signature attention to detail, using full grain leather and parachute-grade stitching throughout.

There are pockets inside the sleeve holder bag for an iPad Pro (up to 12.9-inch), Lightning cable, charger, two neat pen/stylus holders, and even space for a notepad and a wireless Apple Smart Keyboard.

An enclosing flap folds over to keep your stuff secure inside, and stays shut with an elegantly designed "tuck-locking" bookmark flap, which we think really seals the deal.

Integrating an ergonomic keyboard within the confines of a slimline 9.7-inch iPad Pro case is no easy feat, but Incipio has done a stellar job marrying the two in the form of the ClamCase+ – and it has even thrown in LED backlighting for good measure.

Attaching the keyboard to the tablet is a smart hinge that can be adjusted through 360 degrees, and seamlessly activates your iPad Pro's sleep and wake functions.

With Bluetooth pairing, syncing the two is quick and easy, while the built-in battery offers months of use on a single charge. And of course, the aluminum enclosure protects your iPad Pro from bumps and scratches, like any good case should.

For productivity and protection

If you want to use your iPad Pro as a laptop replacement then a keyboard is an essential accessory, and while the official Smart Keyboard is a strong option the Logitech Create is a great alternative.

In fact, in some ways it tops Apple's terminal, with a full protective case ensuring the back of your iPad Pro stays protected, and backlit keys so you can type in the dark. It's also cheaper than the Smart Keyboard.

On the downside it adds quite a lot more weight and thickness to your slate, but a palm rest at the bottom makes it comfortable to type on, and nicely spaced keys ensure you can do so quickly and accurately.