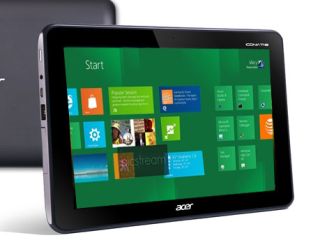 Acer believes that Windows 8 could well be the next tablet OS that provides a good fit for both consumer and business customers.

Currently, Acer's research suggests that its Windows 7 tabs very much appeal to business customers, with its Android tabs squarely aimed at the consumer market.

However, Acer told TechRadar that the forthcoming Windows 8 OS could bring Microsoft back to consumer tablet devices.

"We think that Windows 8 tablets could well be a proposition for both consumers and professionals," said a spokesperson.

"We were not sure when we made our Windows 7 tablet who it would appeal to. But based on our experience and the deals that we have done since launch we now understand that this was a tablet for professionals," she added

"But Windows 8 is already a completely different story. I think it will be for both professionals and consumers."

With Microsoft just releasing the Windows 8 consumer preview, the first devices sporting the new OS could appear at the end of 2012.

And the Metro interface, combined with the traditional desktop, is very much aimed at bridging the gap between consumers and businesses.