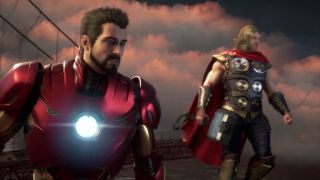 Being a superhero is tough work, so Square Enix is taking at least one hurdle away from wannabe crusaders with its upcoming Marvel's Avengers game: an always-required internet connection.

In an interview with GamesIndustryBiz, Crystal Dynamic's boss confirmed that, despite the game's focus on online multiplayer mechanics, Marvel's Avengers will be playable offline and solo.

"We want somebody to be able to go buy a disc and never have to go online," he said. "You don't have to. You can have a complete experience and have fun."

He also emphasised the ability to fully customise the comic book heroes throughout play – which may go some way to allay the fears of those who were disappointed to find the game's stars do not share likenesses with their cinematic Hollywood counterparts.

"The idea, from the beginning, is that we want you to be able to customise your hero; how they look, how they play, the gear they have and how they use it," Amos said.

"Your Black Widow could be different to my Black Widow – just a little, maybe a lot – depending on what you favour and how you unlock things."

In what's surely set to be music to the ears of those frustrated by pay-to-win mechanics, the game will not feature any "gameplay paywalls" or loot box mechanics.

"We want people to be able to play together and go on this journey, but we also want to say if you want to over-invest in your characters and customise them, you've got it," Amos said.

"We also have ways for you to earn a lot of those things. We want to give players as much flexibility as possible because it's for them. We make this for the fans. At the end of the day, we will listen to them and get feedback from them and we'll adjust everything to serve that need... We want to reward them for the hours they're investing in our game."

'The best of the best'

Square Enix is pulling out all the stops to make Marvel's Avengers a hit, and has five studios, plus a Japanese tech team, working on the game, staffed with some lauded developers.

We were already aware that Naughty Dog's Shaun Escayg would be the game's creative director, while EA/Visceral's developer Stephen Barry is game director. We've now learnt that Dave Fifield of Call of Duty / Halo fame is onboard for multiplayer design, and Vince Napoli of the recent God of War reboot is taking care of combat design.

"We cherry-picked the best of the best and said: 'Let's put this together in a new way for something bigger than we've ever done,'" Amos teased.

Marvel's Avengers will be hitting PC, Xbox One and PS4 consoles and the Google Stadia streaming platform in May 2020. There's no word yet on a PS5 or Xbox Project Scarlett release just yet, but with those console launches looming we'd be shocked if a next-gen port wasn't also being planned.