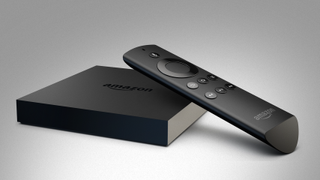 An Amazon streaming service could sit on the Fire TV box

Amazon is on the verge of announcing its entry into the music streaming world, but it may not start out as an all-encompassing Spotify beater, according to reports.

The New York Times claims the company could launch a "limited" service offering thousands (as opposed to millions) of songs free to Amazon Prime subscribers as soon as this week.

However, the catalogue will apparently be bereft of new releases, current hits and will not have access to the entire Universal Music library.

Sony, Warner and smaller independent labels have signed deals with the retailer, but no Universal means no Katy Perry, Lady Gaga, Taylor Swift or Eminem.

The proposed service would sit alongside the Prime Instant Video service, which offer Amazon Prime customers thousands of movies and TV shows.

The firm recently raised the rates on customers so a music service, albeit a limited one unlikely to threaten the streaming big guns, could sweeten the deal for those enjoying free 1-2 delivery in various territories.

The company is planning an event on June 18 where it is likely to unveil the rumoured Amazon smartphone. Perhaps the streaming service will be on board, too?