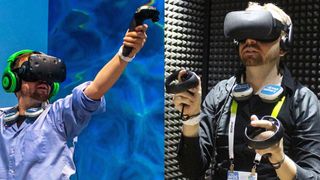 Virtual reality had up until recently been a very expensive endeavor. When the HTC Vive, Oculus Rift and PlayStation VR all launched in 2016, many worried that prohibitive pricing would keep the nascent VR category from growing.

Growth no doubt suffered due to initial high prices, but in the years since launch, costs for the three headset heavyweights have gone down drastically.

Now, markdowns to the HTC Vive, Oculus Rift and PlayStation VR price have brought the most popular VR headsets into the realm of reality for many shoppers. The PlayStation VR has been the least expensive headset from the start, but recent price cuts have made the Oculus Rift and HTC Vive more affordable as well.

Below we've broken down the HTC Vive, Oculus Rift and PlayStation VR prices for the US, UK and Australia, so you can see what you'll need to spend to jump into virtual reality.

We've also got details on all of the hidden costs that each VR device carries. Just how much will you have to spend on a VR-ready computer or vital accessories? We've got the answers.

We'll keep this page updated as new HTC Vive, Oculus Rift and PlayStation VR price markdowns come in. Given the trend, we wouldn't be surprised to see these numbers change yet again before 2018 runs out!

But in exchange for walking through room-sized VR realms, the HTC Vive price has you shelling out the most cash of the top three headsets.

That is, unless you opt for the recently released HTC Vive Pro, designed with superior visuals and a more comfortable fit than the old Vive, but at a prohibitively expensive price.

Facebook’s VR headset goes toe-to-toe with the Vive in resolution, refresh rate and field of view, and its bundled Oculus Touch controllers offer features the Vive wands lack, but the Vive beats out the Rift in room-scale VR and overall experience.

If you do want room-scale movement tracking, you'll have to spend $59 / £59 / AU$69 per sensor; since three sensors are recommended for full 360-degree tracking, that will put you at or above the Vive's cost out of the box.

As a plus, PlayStation 4 owners don’t need a heavy-duty PC rig to use the PlayStation VR, but they also get an impressive library of PSVR games and even see comparable performance specs to the Rift and Vive.

But PlayStation VR's tracking and motion controls can be wonky, room-scale tracking is nonexistent, and some vital accessories aren’t always bundled in.

The PlayStation VR bundles have the most variety among the headsets, with different starter games like Doom VFR, Skyrim VR or Until Dawn: Rush of Blood available, but most bundles outside of the US don’t come with PlayStation Move controllers for hand tracking. A pair will set you back about $90 / £70 / AU$120.

Unlike standalone devices like the Oculus Go, you'll need to tether these headsets to another device to power the VR experiences. Without a PC or console, your headset is just a useless piece of plastic. Or a really ugly hat.

With the PlayStation 4 Pro, you can play VR games in Pro Mode, which we noted improved the experience but was ultimately underwhelming.

For the Oculus Rift or HTC Vive, you'll need a VR-ready PC. We managed to build a Rift-cable rig out of PC parts that, altogether, cost less than $900 / £800.

And lower-range PCs are more likely to produce latency and graphical problems, regardless of which VR headset you pick.

Hopefully, you already have a computer that can run VR content, so you can avoid a pricey start to your VR dreams. Both Oculus and HTC have compatibility check tools to see if your PC can handle their headsets.

Is the price right?

Figuring out the cheapest or best price for a VR rig is no easy task. Each headset comes with hidden costs you'll need to pay to make sure your virtual worlds are as immersive as possible.

You undoubtedly pay the most for the HTC Vive, and you'll need a top-of-the-line PC to get the most out of it, but its superior specs and design ensure it's worth top price for VR enthusiasts who can afford it and have room to spare, and the starter bundle has everything you need.

But for owners of cramped apartments, for whom room-scale VR would be a luxury, both the Oculus Rift and PlayStation VR could be better bargains.

And for just a few hundred dollars or pounds, PlayStation VR is a great starting point for those who don't want to invest in an Oculus Rift or HTC Vive now or ever.