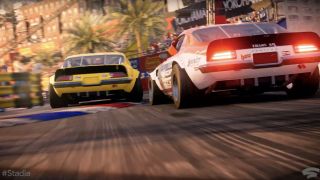 The Google Stadia streaming service certainly has a lot riding on it: all those AAA titles that need to run on our terrible home internet, competition with traditional consoles like the Xbox One and PS4, and plenty of internal technical challenges we’ll likely never hear about.

But what will make or break the service is its games, and the latest Google Stadia Connect live stream has shown off a bunch of titles coming to the games streaming service, and it’s certainly catching our eye.

Google Stadia will no doubt be launching with a smaller library of titles to the likes of Xbox and Nintendo Switch, given its relative infancy, but it’s clear Google is working to bring games people actually want to play to the service. Here’s the list of new Google Stadia games just announced, and why they might tempt you to try out the platform.

CD Projekt’s technological dystopia looks set to be one of the biggest games of 2020, if not the decade. Unsurprisingly, Google wants it on its platform. As the spiritual-successor follow up to The Witcher III, and featuring Keanu Reeves no less, Cyberpunk 2077 will no doubt be a very popular game for the Stadia service.

Superhot seems to be getting announced on everything nowadays: just hours after learning the hit indie game was coming to Nintendo Switch, it looks like it will be landing on Google Stadia as well. A time-bending polygonal FPS that speeds up the clock as you move, and freezes the action as you’re still, it’s a puzzle as much as a shooter, and a must-play if you haven’t tried it already.

They really must. This cartoonish tower-defense game has been going for three iterations now, pitting you as the keeper of a castle who has to stop invading forces of orcs and monsters from laying waste to your property. With a third-person view and the requirement to get right up in the action, Orcs Must Die! stands out from the breadth of top-down tower-defense games out there.

Who said machines can’t dream? Following three down-on-their-luck robot musicians, this this is a silly and playful 3D puzzle game, with a forgiving undo feature that should make it more thoughtful than stressful.

The fourth Darksiders game, and the fourth Horseman of the Apocalypse. A fiery and chaotic hack-and-slash game due out later in 2019, those playing on Stadia will get to be one of the first to play it too – unlike a lot of the older ports on this list.

The latest in the Watch Dogs series looks set to raise the stakes, with a post-Brexit UK London setting, and a bafflingly impressive ability to pick out any in-game person you pass in the street and make them become a playable character – with a “unique gameplay build” and personal backstory – making for a fun commentary on the giant interconnected media platform we live in today.

Part Zelda, part Assassin’s Creed Odyssey, all Ubisoft. Gods and Monsters was first shown at E3 2019, and promises to offer third-person adventuring with a sprinkling of Greek mythology to season it all. It has a fun cel-shaded art style, and seems to very much take its cues from Breath of the Wild. But can it match Breath of the Wild 2 when it lands?

The latest Mortal Kombat game is an interesting one, throwing franchise favorite characters into the fight against their past (or future?) selves for some truly narcissistic battles. There’s a lot of blood, a lot of spines being torn in two, and basically everything you’d expect from a Mortal Kombat game.

Windjammers is one of those games we never thought would see a sequel, but the 1994 extreme sports title – if, you know, frisbee was an extreme sport – offers a top-down perspective of the high-octane action only two frisbee athletes can create. This should be a fun one.

A bit of silly fun, with this remake of the PS2-era alien-em-up. Expect some light third-person shooting and exploration, with a dollop of B-movie humor thrown in.

Is there anything more pure than a player’s love for their tractors? Farming Simulator 19 is the kind of game that prides itself on faithful recreations of farming machinery, and offers a peaceful respite from the chaotic hack-and-slash fighting games also found on Google Stadia. Speaking of which...

Showing Google’s confidence in framerate and stability is Samurai Shodown, another twitch-perfect arcade fighting game coming to the platform. It’s the latest instalment in a franchise that first spawned on the NEO-GEO. If Google can impress the demanding hardcore fighting crowd, that’ll be a huge achievement.

The latest Grid racing game from developer Codemasters, set to bring a whole world of cars to your living room. But will Grid feel different from the other competitive racing games out there? You’ll have to wait until September – or November, if you’re waiting on Stadia – to find out.

The second Attack on Titan game, based on the iconic anime and manga series. If battling giant humans and whizzing around the air with lightning-fast swords is you thing – and why wouldn’t it be – Stadia will have the goods for you.

The Elder Scrolls MMO has somehow managed to become one of the best MMO’s out there, despite an initially rocky launch, and throws together the stalwarts of the Elder Scrolls franchise – dragons, magic, typical high fantasy – with a flourish.

A gazillion guns, and a gazillion bad jokes from love-it-or-hate-it robot Claptrap. Yep, Borderlands 3, the sequel to the original loot-em-up shooter is coming to Google Stadia.