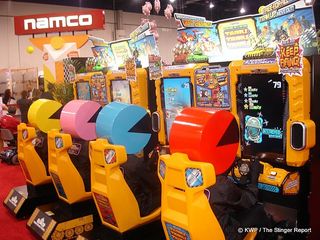 Unlike most Brits, many Japanese gamers are still hardcore arcade addicts, flocking to Japan's annual All Nippon Amusement Machine Operator's (AOU) event each February to see what new amusements are on offer from the likes of Namco, Taito, Sega and Konami.

For anybody who was in their teens or twenties in Britain throughout the 1980s, mere mention of those four company names triggers a deep-seated nostalgia for the early days of electronic gaming.

For what seems a more innocent age, when wandering into the seaside arcade to play Sega's mighty OutRun or After Burner, Konami's Track and Field, Atari's Gauntlet or Pole Position, or (my own personal favourite) Irem/Data East's Kung Fu Master.

Most hardcore gamers and games developers still retain that passion for the arcade, although to be fair the closest many of them get is by downloading some dodgy MAME ROMs on their laptops for a quick retro-nostalgia fix now and then.

The ubiquitous next-gen home console now means that Britain's arcade scene is a shadow of its 1980's glory days, though there are still plenty of (often secret) places to be found in every major city where you can find a smattering of the best new games coming out of Japan each year.

"Japanese arcades have always tried to give players something they cannot experience anywhere else," says Kotaku Editor, Brian Ashcraft, author of the superb book Arcade Mania: The Turbo-Charged World of Japan's Game Centers.

"With graphics at the level that they are today on home consoles, arcade game developers need to offer something else. 3D seems like a smart choice. Also, hi-def screens, as not everyone in Japan has an amazing TV set-up are another good idea. Networked play is smart, too, because many Japanese players have traditionally been reluctant to play online."

Ashcraft argues that fighters and shoot 'em up games continue to have a strong showing in Japanese arcades simply because they still, "offer the best environment and play conditions to enjoy these types of games."

ARCADE MANIA: We've all been there

Even though there was evidence of a slight downturn at this year's AOU, there is no argument that the arcade industry in Japan is still in rude health.

"The reality is that the dip in revenue seems more based on the financial conditions in Japan," says industry analyst Kevin Williams, who edits the trade news outlet The Stinger Report - with the amusement arcade able to keep its head above water better than the dip seen in consumer game revenue.

"The digital out-of-home entertainment market has grown in recent years as interest in unique and compelling content in the social environment mimics the drive to social networking online." Williams adds.

TechRadar spoke with a number of arcade industry analysts and reps from the likes of Sega and Konami to find out more about where the arcade industry in Japan is at right now. What are the key trends and the new games and technologies that are driving innovation (and footfall) in the Japanese arcade? What were the highlights of this year's AOU? And what are the strangest games right now to be spotted in dingy corners of Akihabara's vast five-floor gaming parlours?

Next Page Where to play in the UK?
See more Gaming news