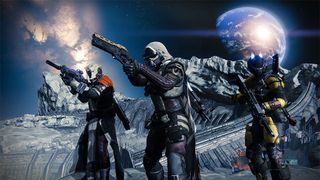 Destiny has been in development for years

Since Bungie broke off from its many-year partnership with Microsoft in 2007, it's been surprising to see the company turn around and hook right up with Sony for all these Destiny PS4 exclusives.

Bungie even gets exclusive dibs on launching Destiny with the white PS4.

One has to wonder how long the partnership has been going on. Did Bungie plan to hop right into bed with Sony the minute it changed its Facebook status to "single"? Or is it a more recent fling?

During an interview at E3 2014 Bungie Head of Community Eric Osborne revealed that, in fact, Bungie and Sony have been working together since before the PS4's design was even finalized.

"Sony's been a really good partner all the way back to the beginning when we were first talking next-gen, and when we first started building Destiny," Osborne said. "We really didn't know where anybody was going, but it became really clear talking with Sony at the outset that their vision really aligned with where we wanted to go."

But it was more than their visions aligning - Osborne said Bungie even influenced the PlayStation 4's design.

"They worked with us, of course, on core systems and the controller itself - making it better for shooters, helping improve that for players, helping include and improve the social aspects of the game," he said.

Osborne continued, "But when we lined our pillars up with what we believed we wanted Destiny to do and put them against their pillars with what they wanted the PS4 to do it was like looking into a mirror."

Osborne said Sony has been "a really good partner" to Bungie, but the developer is also aware that they have a long way to go with Sony's fans after years of Xbox exclusivity.

"We have to make some inroads with Sony fans, who haven't really experienced any Bungie games before," he said.

To that end, PS4 players are getting an exclusive co-op strike mission, plus gear, weapons, ships, and a multiplayer map that may or may not ever make it over to Xbox One - not to mention the game's recent PS4-exclusive public alpha and white PS4 bundle.

"We're building on all four platforms that we've announced. We have to make sure that [Destiny] is amazing everywhere, especially as a new IP. We have to earn all these fans," Osborne said. "But specifically with Sony we have some work to do in terms of awareness and getting people excited about a Bungie game."