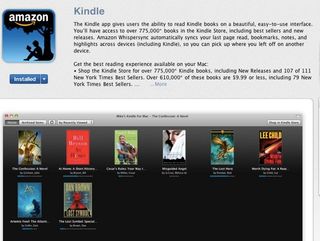 Amazon has revealed that its Kindle app is now available from the Mac App Store, the relatively new application store for Apple computers.

The Kindle app may feel more at home on a portable device, but it seems that it is popular on other devices too, being that it is already the fifth most popular app on the store.

Amazon has been strengthening its Kindle brand for some time now. The physical ebook reader is the best-selling product ever on Amazon and its app has found its way onto many a mobile device.

It was rumoured in December 2010 that a web version of the Kindle Store was just around the corner, which would give the service ubiquity.

However, it is still app-bound for now, with the Apple version offering everything you expect from the ebook service – over 775,000 books and counting.

Of course, Macs have had access to the Kindle service since last year but it has now been given a home on the Mac App Store and can lay claim to being the first ebook reader available on Jobs' shiny new service.

Via Gizmodo and TechCrunch