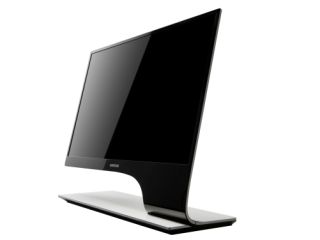 Remember the curvaceous, slightly shark-like Samsung 3D TV we showed you just before the onslaught of CES? Turns out that it's actually a monitor, and one we'd happily have on our desks.

Quite aside from the sharp design aesthetic, the monitor can convert 2D to 3D and is indeed an LED-backlit affair as we reported previously, with a contrast ratio of 1000:1.

There are 23 and 27-inch versions of the screen, as well as regular and HDTV/monitor options, with response times between 2ms and 5ms.

With all these outputs on the HDTV version, Samsung is truly spoiling us – there's something to suit even the fussiest of connections: USB 2.0, HDMI, RF In, audio out, digital audio out, PC audio in, component, composite, Ethernet and RF out.

After all that, the regular monitors sound positively barren with just DisplayPort and HDMI.

The Eco-motion sensor built into all models will see the monitor automatically switch its screen off when you leave the room, which saves you the tedious job of remembering to do it yourself.

There's no official UK release date to speak of just yet, but March has been mooted for other regions; UK pricing will be stratospheric, no doubt.

Via Gizmodo and CNET