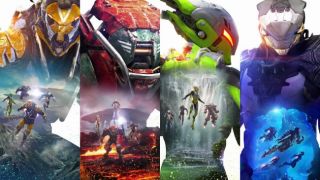 E3 2018 is now underway and that means there’s a glut of exciting trailers coming your way. This is the show where some of the biggest names in gaming gather together to show off what they’ve got planned for the next few years and there’s no better way to do that than with a seriously impressive trailer.

If you’re tired of trawling through the words and clicking through the pictures, the trailer is your friend, so on this page we’re gathering together all the most essential trailers from each E3 conference in one place for your enjoyment and convenience.

Keep checking back, we'll be updating this page after every show with all the must-see trailers. If you do want a more in depth run through of what's been announced, however, don't forget our E3 2018 news hub where we have all the latest announcements in one place.

This is a HUGE game featuring every single character from the mascot-filled fighting series. It's out on December 7, but get your fill today with the new trailer revealed during Nintendo's E3 press conference.

Yes, Fortnite is coming to Nintendo Switch. It's the Battle Royale version of the game, so not the full fat game, but it looks like a rocking good time that taps into Switch's unique take-it-anywhere abilities.

The big news here is that SMP is coming to Nintendo Switch, so you can get your multiplayer on with all your closest pals.

Probably the most hype-tastic trailer from Sony's E3 presentation, Resident Evil 2 looks utterly terrifying... and utterly awesome. Sony promises it's been completely rebuilt from the ground up, and we can't wait for this game to give us nightmares when it launches in January 2019.

The footage in the new Spider-Man trailer is a who's who of villains, with Electro, Rhino, Scorpion, Vulture, and Mr. Negative all making appearances to really punish poor Spidey. Not only does the trailer give us a good look at combat, it really showcases the traversal mechanics; our hero moves fluidly both on foot and through the air.

Famed creator Hideo Kojima's forthcoming game has so much buzz around it, it's almost deafening. And during PlayStation's E3 press conference, we got an extended look at the game that will likely only generate more buzz. We still have lots of questions, but at least it's more than the quick tease we got at last E3.

Reminding us that video games can also be works of art, the Ghost of Tsushima trailer is stunning. The trailer shows a huge open world backed by gorgeous landscape and a soaring atmospheric soundtrack. Combat and stealth are the name of the game in Ghost of Tsushima.

Sony did its E3 showcase differently this year, focusing on diving into select games versus deluging the audience with dozens of announcements. The first deep dive was all about The Last of Us 2, and the trailer did not disappoint. It's a tone-setting trailer that reveals a game centered on Ellie as she fights for her life.

Kingdom Hearts 3 + Pirates of the Caribbean

This mashup generated a lot of excitement from the TechRadar staff, and why shouldn't it? Combining KH3 with the Pirates of the Caribbean crew seems like a natural fit and a whole lot of swashbuckling fun

File this in the utterly ridiculous column for E3 2018, but we have to say, if you ever wanted to be the shark in Jaws, Maneater is your chance. You literally play the shark in this Action RPG from Blindside Studios. Just... watch the trailer.

Beyond Good and Evil 2

The long-awaited (and much-delayed) sequel blew a lot of minds this week with its lavish, cinematic trailer that hints at a fresh start for the old property.

Assassin's Creed Odyssey is real, and it's coming out on October 5. Set in ancient Greece, you play an outcast Spartan hero, either Alexios or Kassandra. The trailer is gorgeous, of course, and sets the stage for what should be an epic odyssey.

This pirate adventure looks ah-mazing, if the new cinematic trailer unveiled at E3 2018 is anything to go by. Buckle up, mateys, this is going to be one thrilling ride on the high seas.

Mix speed, dirt and a whole lot of crashing and crazy stunts and you get Trials Rising. It's whacky and exhilarating, and worth checking out the trailer just for kicks.

Revealed during Square Enix's E3 press conference, Babylon's Fall is a game being developed by Square Enix in partnership with Platinum Games for release on PS4 and PC. Not much is known about the game just yet but this trailer is so striking that we can't wait to find out more.

Those hoping for an all-out action trailer this E3 will have been glad to see Just Cause 4 make an appearance. It looks like we can expect the usual huge open world, explosions, boats, cars and trucks. But with added intense weather. Let's see how Rico fares against a cyclone.

Shadow of the Tomb Raider

Square Enix took the chance to show off some in-depth Shadow of the Tomb Raider gameplay during its showcase and show us just how far Lara has come across the trilogy. Once a young woman struggling to survive, Lara has gone full Rambo, sneaking through the jungle and using her environment to her advantage in her fight against Trinity.

Attention, Doom fans: there's a new game coming your way. Doom Eternal was announced at Bethesda's showcase as a sequel to the 2016 installment. We don't have many details, other than Doom Eternal features double the demons. It also looks to take place on Earth, making it extra scary.

Bethesda wasted no time jumping into Rage 2 at its E3 showcase. A new trailer gives us a sense of the game's Mad Max aesthetic, which you can play for yourself in Spring 2019.

Wolfenstein is one of Bethesda's biggest franchises, and it's back with a new game called Youngblood, set 19 years after the action in The New Colossus. Set in 1980, twin sisters must find their missing father in a Paris overrun with Nazis.

We didn't expect it, but we got it anyway: Elder Scrolls 6 is confirmed, and a new trailer unveiled at E3 2018. There's not a ton to go on, but it's something, so we'll have to take what we can get.

What is Starfield? It's Bethesda's first new original franchise in 25 years. We don't have a lot to go on other than it's a single-player game set in space. It looks like it'll be an epic on the scale of Fallout and The Elder Scrolls, however, so we're definitely looking forward to this one.

Fallout 76 really came to life at E3 2018 as we got an early look during Microsoft's Xbox showcase on Sunday. The latest installment in the Fallout franchise takes place in West Virginia, and is a prequel to all the other Fallout games. It's also four times as big as any other Fallout before it. The new E3 trailer below really sets the tone.

Bethesda made a second trailer for its hotly anticipated Fallout 76, this time focusing on all the goodies you get with the Power Armor Edition of the game. It includes a wearable helmet, glow-in-the-dark terrain map, and collectible figurines.

Microsoft lifted the lid on Halo Infinite, or Halo 6 for those keeping track. The game will pick up after the conclusion of Halo 5: Guardians – which saw Cortana and the other ‘Created’ AI seize control of the galaxy.

We got a real taste for Forza Horizon 4 at E3, and lots of details, too. The game is set in the UK, taking players down country roads, across hilly highlands and through city streets. The next Forza installment is out on October 2, so until then, get your fill with the announcement trailer below.

OK, this Microsoft exclusive may not be out until 2019, but we at least got to see some new in-game action during E3 2018. Crackdown 3 is a long time coming, so while this trailer gives us a new look at the game, it may not be enough to satisfy every waiting fan.

Why not bring one of the most popular animated movies of all time into your video game-verse? That had to be part of the discussion that led to Frozen being included in Kingdom Hearts 3. The game may not be out until January 29, 2019, but when KH3 releases, you may not be able to let it go.

Rousing a big cheer from the Xbox showcase crowd, we got confirmation of Gears of War 5 at E3 2018. A new trailer shows Kait Diaz, Marcus Fenix and the rest of the Gears crew. Locusts will again play a major role in the series when it releases sometime in 2019.

Cyberpunk 2077 may be from the same developer as The Witcher 3, but it's got some significant aesthetic differences, as revealed in the new trailer from E3 2018. It still looks to keep elements of the gameplay, themes and tone that we loved about Witcher 3, though. All in all, it looks like it'll be one hell of a ride.

Finally, we’re getting a better look at BioWare’s brand new upcoming game Anthem with a brand new cinematic trailer. But we’re finding it doesn’t really look like the kind of BioWare we’ve come to know - no alien flirting or tough narrative choices here. What we are getting is a humanity trying desperately to survive by using “incredible Javelin exosuits.” We’re getting definite Destiny vibes here but whether or not that’s a bad thing is completely down to you.

We knew it was going to appear but it’s always comforting to see a new FIFA trailer isn’t it? There’s game engine footage in this trailer and it’s looking impressive. But it’s the inclusion of the UEFA Champions League that has us seriously excited. It’s a big win for FIFA and its fans and the full game will be available from September 28.

Another member of the EA Sports family, we would have been more shocked by the absence of a Madden NFL 19 trailer than the fact that it was present. The game will be released on August 10 but the truly big news is that it's coming to PC.

When it was released in 2016, the original Unravel game was a visual delight. And we’re happy to see that it looks like its sequel will be exactly the same. The only thing better than seeing that we're going to get more yarn-based adventures with interesting puzzles and a delightful co-op mode? That’d be that we can actually buy the game on Xbox One, PS4, and PC digital storefronts already. Oh, and there are Xbox One X enhancements which means all that cuteness is available in 4K.

You didn’t think we’d talk about FIFA and Madden and completely miss out NBA did you? Of course not! NBA Live will be released on September 7 this year and from what we can see from this trailer it’s going to be the most impressive release in the series yet.

Battlefield’s single-player campaign may promise to be touching and emotional but its multiplayers mode looks like it could be utterly thrilling. This trailer gives us a good look at what we can expect from Battlefield V. We think it looks pretty wild but you can judge that for yourselves. Shall we all feign surprise about that battle royale mode reveal?