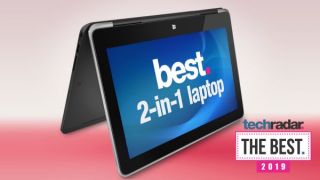 Over the last decade, we have changed the way we use our laptops – thanks for the most part to the best 2-in-1 laptops. Hybrid laptops come in many shapes and sizes, and there’s nothing like flipping that laptop into tent mode to watch Netflix or into tablet mode for playing Plants vs Zombies after a long yet productive day of work on that same computer.

Many of the best 2-in-1 laptops, like the Dell XPS 15 2-in-1, come fitted with the best processors, which also makes them some of the best laptops on the market right now. And, we can’t wait to see what the future holds for this versatile form factor.

The best 2-in-1 laptops are, more often than not, convertible, so the keyboard flips around the back, transforming the device into a tablet. Other devices, like the Surface Book 2, approach it differently. Microsoft’s convertible has a detachable screen, and its high-resolution PixelSense display is held up by sheer magnetic force when in laptop mode. No matter how they deliver the 2-in-1 functionality, these versatile laptops usually have stylus compatibility – even if it’s now becoming rarer to find a stylus included in the box.

To help you find the best 2-in-1 laptop for your needs, we’ve put together a list of the best hybrid notebooks we’ve reviewed recently, taking all their pros and cons into account.

Have you been on the market for one of the best 2-in-1 laptops that touts some serious horsepower? You’re in luck. The Dell XPS 15, which incidentally gets our vote for one of the best Ultrabooks you can buy today, has been elevated as among the most coveted 2-in-1 laptops – with discrete class Radeon RX Vega graphics to boot. With it, you get a stunning convertible without sacrificing sheer power. So, while it has a price tag that’s a little on the high end, it’s completely worth the hole in your pocket.

For years, HP’s Spectre line of Ultrabooks and 2-in-1 laptops has been all about blending elegance with performance, and the 2019 HP Spectre x360 15 is no different. Touting an 8th-generation Intel Core i7 CPU, Nvidia GeForce GTX 1050 Ti graphics and 8GB of RAM in its base configuration, this 2-in-1 can handle anything your daily workload throws at it – and then some (like a bit of light gaming like playing Anno 2070, for example). Just bear in mind the Spectre x360 is a bit heavy for a 2-in-1, so you likely won’t be using it in tablet mode that often. Put it in tent mode instead, and watch some movies on its stunning 4K display.

We had nothing but love for the original Surface Book. So when we heard that there was going to be a 15-inch Surface Book 2, we couldn’t contain our excitement. Unfortunately, in the end, the Microsoft Surface Pro 2 isn’t the best 2-in-1 laptop out there. However, it’s still an impressive machine that’s only held back by a handful of necessary compromises. This 2-in-1 laptop features cutting-edge 8th-generation processors as well as Nvidia 10-series graphics for gamers and creatives alike. Couple that with its unique convertible solution, and the Surface Book 2 is an ace in our book.

Multi-faceted dexterity that stomps the competition

While it doesn’t offer the same level of graphics performance, the Lenovo Yoga 920 is a much more affordable alternative to the Surface Book 2. For anyone who’s looking for value, rather than a detachable screen, the Lenovo Yoga 920 has a lot to offer. The design, for example, is less pronounced and has the subtlety of a more traditional Ultrabook. Meanwhile it’s thin and powerful at the same time.

It’s no secret that we’re fans of the Microsoft Surface Book 2 13-inch, seeing as how we only raved about it earlier in this list, but what do we think of its 15-inch counterpart? Well, with its longevity, high-end specs that will breeze through most productivity demands and a lot of entertainment, and of course, its unique design features, we’re inclined to feel the same way. This model isn’t for the budget shoppers, but if you’ve got the cash, its base model with 256GB storage is well worth the $2,499 tag and the best 2-in-1 laptop money can buy.