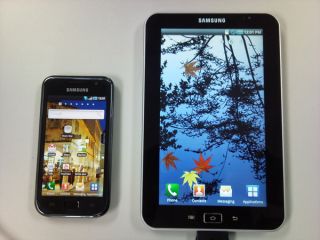 We don't know if it's going to be a Super AMOLED or just a regular OLED powering the device (or even an LCD) but we do now know it will have only WVGA (480x800) resolution.

This would mean it would have a lower resolution than the iPad, although at seven inch screen size it might not look too bad.

Other specs include an ARM11 CPU with a 1GHz processing speed, the ability to playback Flash video and Wi-Fi and GPS, which we'd expect for an Android-powered device.

It will also come complete with Samsung's favourite new trick: Swype keyboard support, so you can swirl your finger around the screen to enter text.

We're still waiting for confirmation the P1000XXJH3 firmware is actually the real deal but given the Galaxy Tab is set to launch at IFA in three weeks time, it seems distinctly likely.