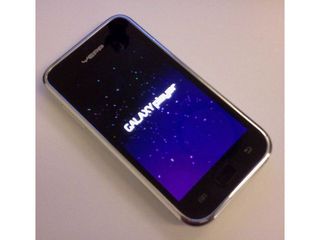 The new Samsung Galaxy Player, likely to be the Koreans' next answer to the iPod touch, has been shown off in pictures.

The new device, which has apparently been given the model number YP-MB2, is set to take a similar shape to the Samsung Galaxy S.

In our Samsung Galaxy S review we noted that this phone is one of the best for media, so it makes sense that it should be extended to become a standalone PMP (as well as the fact it pretty much looks exactly like an iPod touch/iPhone).

A Galaxy of fun

This means the key specs that make it so great will transfer across: 4-inch Super AMOLED screen, 1GHz processor, Android OS (likely 2.1 but fingers crossed Froyo 2.2, as that's supposed to be coming in September for the Galaxy S) and Wi-Fi connectivity.

Differences? It will only be a 3MP camera on the back, and the rear of the phone will be white, rather than black.

Given Samsung will be putting on a big show at IFA, we'd hope this would poke its nose out the door, and TechRadar will be on hand to get a close look with it.