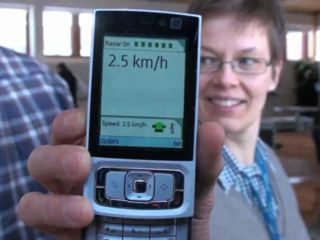 Nokia has announced a cool new feature on its mobile phones - Mobile Radar for your handset.

This basically means that you can measure an object's distance and speed, offering the chance to tell how fast cars are travelling.

Or, more importantly if you're not a police officer, it can be used to register gestures from a user, meaning you can control the phone with waves of your hand.

The concept was unveiled by Nokia from its Research Centre, although there's no word on when it will actually be used on handsets, or even if it ever will.

The radar technology isn't based on the device's camera, meaning it can even be used in the pocket or backpack, as demonstrated in the video below.