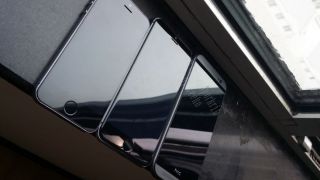 The iPhone 6 shown here is bigger than the 5S, but still smaller than the M8.

Recently there's been a flood of iPhone 6 images appearing and the latest batch show it alongside an HTC One M8 and an iPhone 5S.

The pictures in question show a slim, rounded device that looks as though it's probably slightly thinner than even the 7.6mm iPhone 5S, which reminds us more of an iPod Touch than anything in the iPhone range.

You can also see that it's a little longer and wider than the iPhone 5S, as you'd expect, but a little shorter than the HTC One M8.

These images come courtesy of weekly.ascii.jp and South Korean site Seeko, via G4Games and they're highly reminiscent of a similar set of images that emerged yesterday, suggesting that this may indeed be the real deal.

Of course this is almost certainly a dummy unit we're looking at rather than a final production model, but even so we reckon this is going to be pretty close to the shape of iPhone's to come.