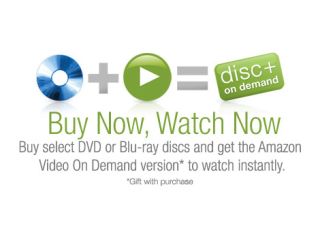 Online e-retailer Amazon has launched a new initiative which gives its customers the chance to watch the movies they purchase instantly via a digital copy of the film.

As speedy as Amazon's disc-selling service is, it still relies on snail mail, so the company has come up with the interesting idea of bundling a digital copy in with the movie for free (it is calling it a gift) so you can get yourself some instant gratification.

Gift that keeps on giving

Called Disc+ On Demand, the service is currently available for 313 titles with the company noting: "Buy select DVDs and Blu-ray discs and watch the Amazon Video On Demand version instantly as a gift with purchase."

Some of the titles available at the moment include The Wizard Of Oz, Coraline and 2001: A Space Odyssey.

The idea isn't a new one – some distributors have been bundling digital copies in with their DVDs for a while now, but it is nice to see someone not linked with the movie studio looking at digital in this sort of way.

Currently, the service is only available from Amazon.com but TechRadar has contacted Amazon to see if the UK is going to get a slice of the action in the near future.