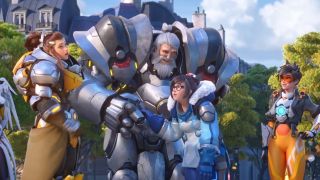 After ESPN broke the news of its imminent arrival, Overwatch 2 has made its official debut at Blizzcon 2019.

The game was unveiled by the series’ creative director Jeff Kaplan who brought an emotion-filled trailer starring the game’s heroes in our first look of the sequel.

As you’d expect, the game will feature new PVP modes with Push being the staple of competitive play, as well as new maps, cosmetic items and characters, including Sojourn, who was unveiled at the keynote.

While the new PVP modes are expected, new for the series is the addition of story and hero missions that allow for cooperative play - a first for the series.

In these ‘highly-replayable’ missions, you and five friends will attempt to complete objectives together against the AI, which should serve as a welcome reprieve from the intense online PVP modes the series is known for.

For the love of 50 million PVP players

Despite a heavy emphasis on the new co-operative modes, Kaplan took time to dispel the myth that Overwatch 2 would lose out on the multiplayer modes that made 50 million people play the game in the first place.

In fact, according to Kaplan, a huge focus for the Overwatch 2 team is making PVP as good as it possibly can be - which includes new maps, new modes and new characters further down the line.

Unfortunately, neither Kaplan nor Blizzard announced a release date for the game but said that both the new Push mode and the first cooperative mission set in Rio de Janeiro will be playable this weekend at Blizzcon 2019.