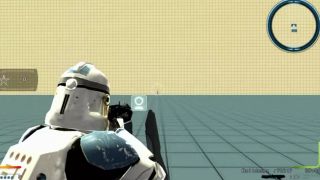 Back in 2006, word surfaced that Free Radical Design had been tasked with developing Star Wars: Battlefront 3. Two years later the company announced the game had come to a halt before EA snapped up the rights to the Star Wars franchise - with just a few videos of footage from the canned title surfacing since.

Now, a playable version of the game has seemingly appeared, courtesy of someone on Reddit who claims to "take interest" in prototype games.

You'll need an Xbox 360 development kit in order to run it, according to the poster. As of writing this I've been unable to try it myself, so I can't say for sure if it works. So far nobody else has claimed to have got it working.

The uploader also posted a series of videos showing footage of the build.

"I know not everyone will get the chance to play this immediately," they wrote, "but over time I expect the modding community to be able to change that."

I've watched a number of Battlefront 3 footage videos over the years, and while I do think EA's Battlefront game has its merits, Battlefront 3 looks like the game that fans have really been clamouring for.

Obviously it looks quite dated now and the build is still quite sketchy, but everything we've seen so far points to a more well-rounded game. The video below shows off some previously leaked footage.