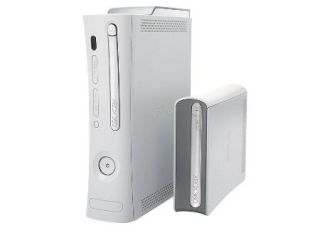 See this Xbox. Imagine a black one. With HDMI. And a 120GB hard drive.

The rumours about Microsoft readying a new version of its Xbox 360 console just won't go away. Pinches of salt at the ready... If websites like Kotaku and Engadget haven't been sold a dummy, we can expect a revamped 360 (with a matt-black finish, 120GB hard drive, HDMI input) at some point in April.

Both Kotaku and Engadget are relying on the word of Game Informer magazine, which suggests that the new Xbox 360 will be the chunky black number we mentioned here . The 'new' news is that this console, codenamed 'Zephyr', will apparently hit the US in April and cost $479 (£245).

Compared to the $699 PlayStation 3, that looks like a bargain.

We said before that the Xbox 360, first launched at the end of 2005, is ripe for an upgrade. The early models have been plagued with problems and, compared to the PlayStation 3, the 360's 20GB hard disc, noisy DVD drive, and VGA/component connectivity seem just a little bit old hat. A new console gives Microsoft the ability to fix all of these technical niggles without alienating its existing user base.

That's why any new Xbox won't have an HD DVD drive built-in. It might be tempting for Microsoft, but why cripple the sales of your new external HD DVD player? And considering the trouble that HD DVD is currently having in its battle against a buoyant Blu-ray, maybe no integrated HD DVD support is just as well.

There's an argument that the market for HD discs is still too small. There's another that suggests Microsoft could just build an external Blu-ray drive and have all its bases covered.

The 120GB hard drive, however, is an obvious addition and this will undoubtedly be launched with or without the black Xbox variant. Microsoft already operates a ' video marketplace ' for US users, enabling them to order and download movies and TV shows via the console. While 20GB was big enough for games demos in 2005, it's a little cramped for the multimedia future that Microsoft has planned.

In fact, we bet Microsoft would rather skip HD discs altogether in favour of digital downloads.

Again, the black Xbox is still just a rumour until the boys at Redmond say otherwise. But if true, Microsoft won't be spoiling Sony's launch day on the 23rd. Everyone who wants to pre-order a PS3 has undoubtedly already signed up for one. You can't convert the hard-core fanboy.