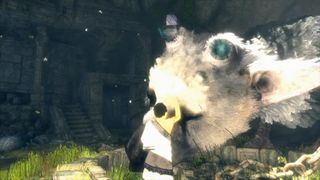 If you'd given up on The Last Guardian, we wouldn't blame you - the game's been in development since 2007, back in the early days of the PlayStation 3, and at one point it looked like the game was completely dead in the water.

Then out of almost nowhere we got new updates at E3 2015 and E3 2016, and the game was back on. Okay, the launch date has been pushed back since, but we can live with that - The Last Guardian will finally see the light of day from on December 6.

While you count down those last few days, check out this 9-minute gameplay preview from PlayStation Japan. All the dialog and text is in Japanese, but it gives you a good idea of the atmosphere and the mechanics of the game.

We're reliably informed the clip is entitled "The flesh-eating eagle of Trico", with Trico being the griffin-like companion creature you get to wander the world with. We see our heroes getting into various scrapes and touring a number of different locations.

Or, if you want to approach the game completely fresh, don't watch it - it's up to you. We've given it a look and it's only heightened our excitement about what's coming our way next week (it doesn't contain anything you could really call a spoiler).

Developed by legendary designer Fumito Ueda, The Last Guardian arrives on PlayStation 4 in Japan and North America on December 6, in Europe and Australia on December 7, and in the UK on December 9.